No matter how you envision a shot in your head, there are things beyond your control that will keep you from making that shot.

I recently attended the annual antique boat show at the Antique Boat Museum in Clayton, NY.  I arrived one day early, so that afternoon I drove out to Tibbet’s Point, which is at the western end of Cape Vincent where the St. Lawrence Seaway flows into Lake Ontario.  I had Googled the area and knew there was a lighthouse there and a wind farm across the river.  I envisioned a dramatic sunset with those elements in the frame, and since the horizon is so level, I wanted to use a three stop reverse GND filter for increased dynamic range. 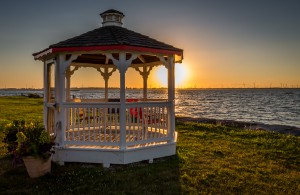 Shot on a tripod with reverse GND.

Arriving at the lighthouse, I instantly noticed the unattractive chain link fence along the water.  There was just no way to keep that out of the shot.  I headed back to Cape Vincent where I had seen a nice gazebo in a town park that would make an interesting foreground element.  By the time I arrived, the few clouds had dispersed and the skies were completely clear – not exactly what landscape photographers hope for.  I shot a series of photos of the sunset and gazebo and got some so-so shots, but not what I had envisioned.  Mother nature didn’t cooperate.

The next evening, I rode the river with a number of vintage boats for a cookout on a state park island.  I was supposed to be shooting the boats for the museum, but again, the weather didn’t cooperate.  It was windy and gray and rough.  The dinner was served quickly so we could head back to the museum before the imminent front blew in.  Luckily we arrived just before the heavy wind and rain.  The participants hurriedly tied up their boats and departed for their motels.  I stayed under a tent waiting for the rain to stop so I didn’t get my camera gear wet walking back to my room.

The rain eventually stopped a few minutes before sunset.  I slung the backpack over my shoulder and started to head out, but happened to look back at the river.  The sky to the northwest was starting to glow orange and some remaining low gray clouds approached the dock…suddenly I had my dramatic backdrop.

Quickly, I retrieved my camera from the bag and hustled out to the deserted docks.  The orange glow and low cloud cover only lasted about five minutes, but I had my dramatic shot – instead of a lighthouse, it was boats at the dock, but you take what you can get! 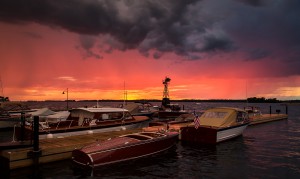 My favorite of the weekend, handheld, single exposure.

The rest of the weekend weather was similar, summery days, the thread of a thundershower at evening and some wild clouds around sunset.  I decided to have a late dinner and hang around the docks the last night to see what happened….and I was treated to more rich color and trippy clouds.

In this case, getting the shot was all about being in the right place at the right time and having the patience to wait for that time. 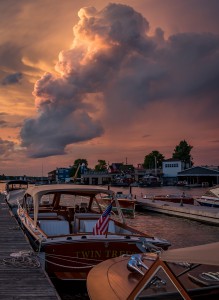 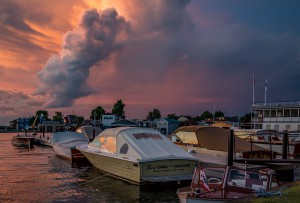