There is something about night shots – a city street, a bridge, a nightscape, all those stars – that is almost surreal.

Night shots can be measured in slots of time that we can understand….seconds, minutes, hours – unlike standard daytime photos that are a moment in time that only existed for a fraction of a second.

There is also something peaceful about being out at night, on your own, capturing these slices of time.

Long exposures at night have their own set of challenges.  Heat can cause noise on the camera sensor.  Long exposure times mean things that move will be blurred.  Unwanted ambient light that you really don’t notice can ruin your photo.  You have to think a bit differently, with a mindset that considers all these issues.

While visiting friends on Marco Island (FL), I had the opportunity to shoot a few night exposures.  After dinner and many drinks, everyone grew tired and decided to turn in for the night….that meant an opportunity to head out and see what I could find.

I light breeze wafted the palms, a few stars poked out, the temperature was pleasant, time to go…

Marco Island proper has too much light pollution to really see the starts.  Back home in upstate New York, you can go out in the countryside and have no ambient light.  But the light of homes reflecting on the canal behind the house and in the tree themselves had a nice homey feeling quality about it.

The boat in the slip was begging for a photo.  The breeze had laid down for a moment, however, the mosquitos picked up.  I shot the boat at f/5.6 for 30 seconds at ISO 100.  Despite the long exposure, the boat hardly moved, but you can see some blur from it’s movement.

Looking off to the right was a boat on a lift.  Better, no movement, so I shot that as well.  I was intrigued by the mirror image reflected in the canal.  Again, f/5.6 for 30 seconds at ISO 100.

Following a good recommendation from a photographer I respect, Rick Sammon, I not only looked at the scene that first attracted me, but also behind and above.  Looking up, as the breeze quickened, rustling the palms, I shot this – 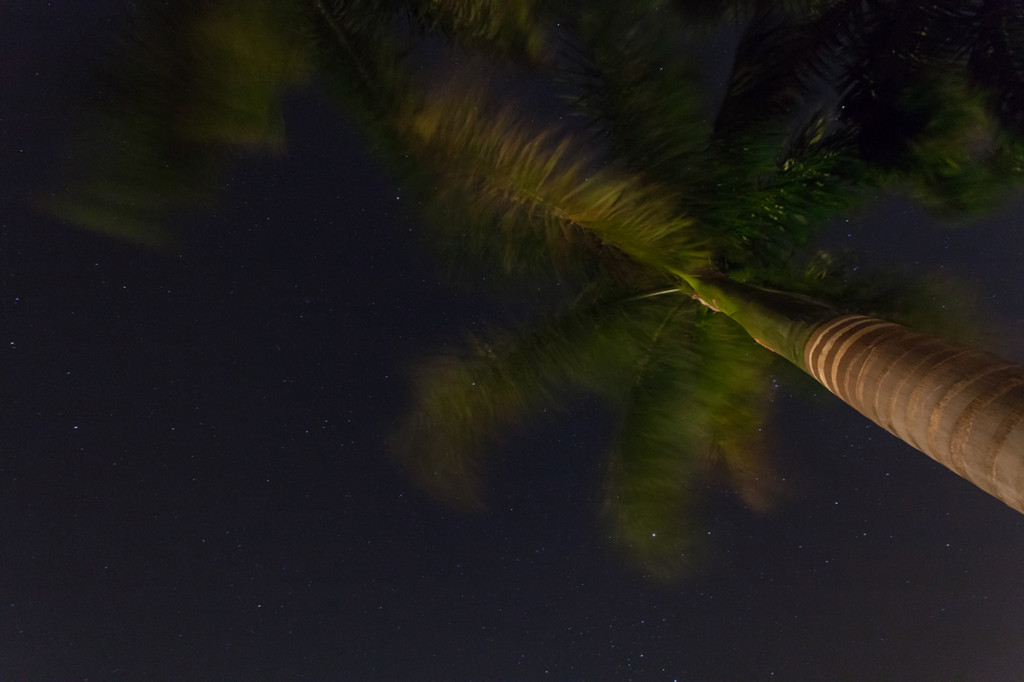 Since there was less ambient light, I had to up the ISO to 2500 to have the same 30 second exposure, but the stars are visible which is very cool.