There is a photography group on Facebook called the “Long Island Sunchasers” that is rather large and very active.  I met a few of them a couple of winters ago while visiting family on Long Island.  We’ve remained online friends, so when I was going back there again, I reached out to them to see if they wanted to meet up.

Jan and Samantha were readily open to the idea.  We exchanged a number of messages brainstorming ideas of locations and times.  They were willing to come out to the east end, and a local professional photographer shared a location with us.  The north shore has rocky beaches and bluffs that would give us infinite compositions.  Looking east, the sunrise would be just offshore from the beach at this spot. 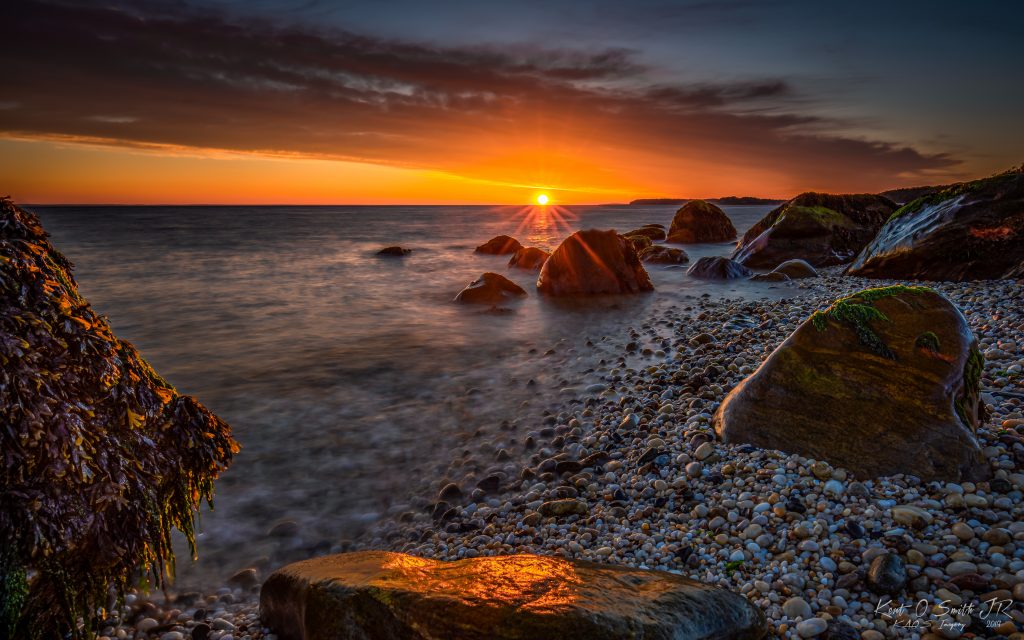 The sun would break the horizon at approximately 5:30 AM, so I planned on being there nearly an hour early for the pre sunrise glow and to allow time to find pleasing compositions.  The gals arrived shortly after I did and we carefully made our way down the couple flights of stairs to the stony beach.  We didn’t chat much, each working the location for their shots.  There would be time to chat over coffee when we were done. 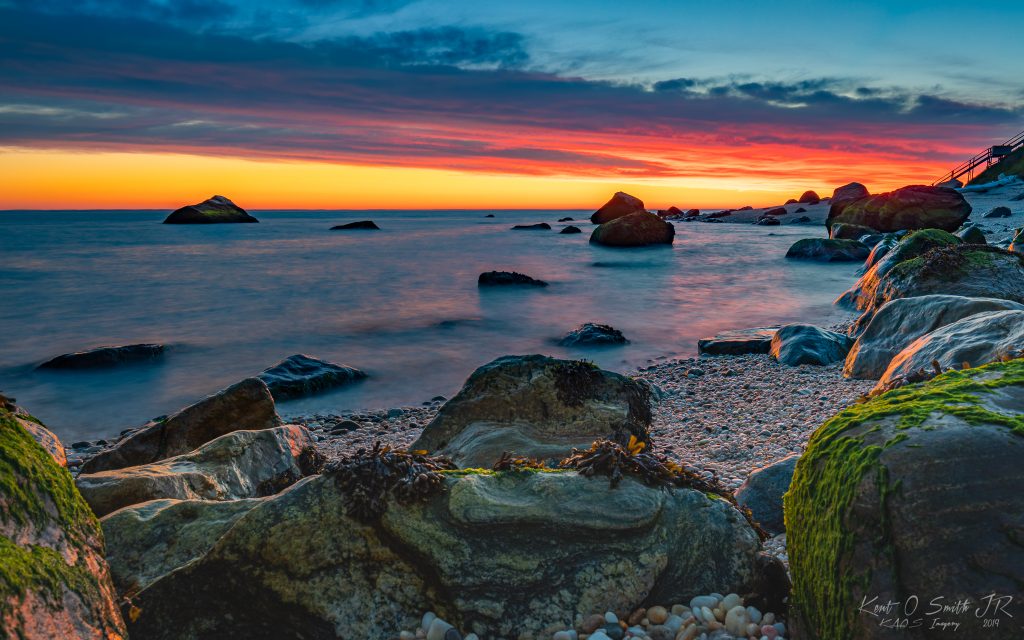 It wasn’t the most spectacular sunrise ever, but it was indeed nice.  The large boulders made for great foreground interest in a number of views and were complimented by the changes of color in the sky.  A narrow shelf cloud angled across the Sound picking up light from the sun as it rose and crested the horizon.  All three of us moved quickly, lining up a shot, taking a few images, then moving on to another shot so as to get as many different looks as possible during a singular sunrise.

My setup was the Canon 5D Mark IV with a 16-35mm zoom.  I used a circular polarizer and a reverse graduated neutral density filter to balance the lighting.  A reverse grad is a special filter that is darkest in the center – where the sun is at the horizon – lightest at the bottom where your foreground is, and an in between darkness at the top to retain the colors and definition in the sky.  I shot three image brackets of slightly different exposures to blend as HDRs if necessary.  My longest exposure of the sequence was long enough to blur out the movement of the waves lapping on the shore. 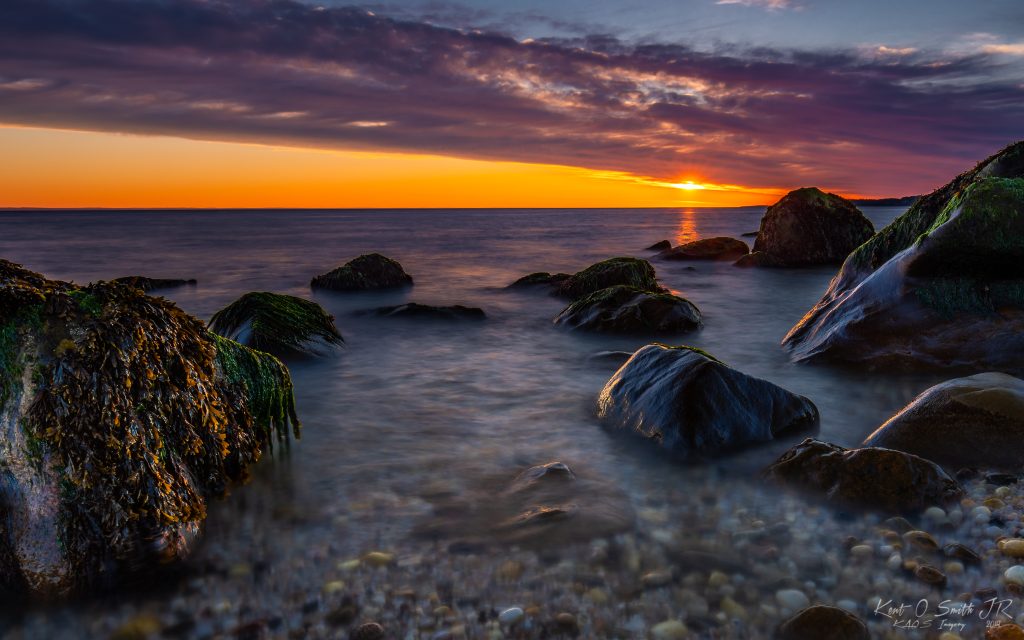 One of the critical elements of our planning this shoot at this location was the fact that it was nearly low tide at sunrise.  That let us get out further from shore and also exposed some neat seaweed on the rocks that would otherwise be covered during higher tides.  I think the green and brown textures really made the images pop against the orange and reds of the sky.  I shot my images as low to the ground as possible on the tripod for an interesting perspective.  Looking at each other’s photos later, it was neat to see that each one of us saw the scene a little differently, proving that there really infinite ways to photograph this location. 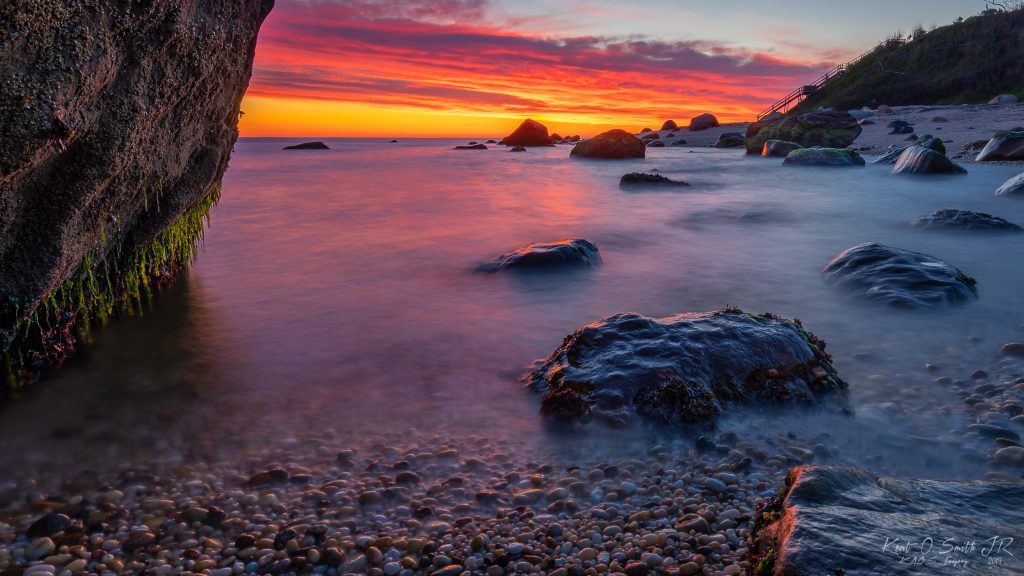