While visiting my mother on Long Island for Thanksgiving, I had the opportunity to create a short film utilizing the combination of time lapse photography and slow motion video.

The overcast skies were dramatic to say the least.  The clouds were moving at a slow to medium rate which I thought would make for a good time lapse.  I composed the first shot on the front lawn of the family cottage that looks out on Peconic Bay.  The steps to the beach and the blue heron wind vane would do nicely as foreground elements.  I set my 5D Mark II on a tripod and set it to manual.  After a few test shots, I had the exposure down.  In a time lapse, since you are taking many images, you want them to be consistent, so manual mode is best.  I also set the white balance to cloudy so it would not change over the sequence of shots. 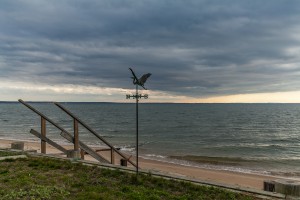 I have a generic imtervalometer to control the camera.  Since the clouds were moving at a slow to medium speed, I chose a three second interval between photos.  My intent was to share this online so a frame rate of 24 frames per second is typical.  To get 10 seconds of footage, I would need 240 frames, so I programmed that into the intervalometer.  Once ready, you press start and the device does all the work.  I went inside for a cocktail. 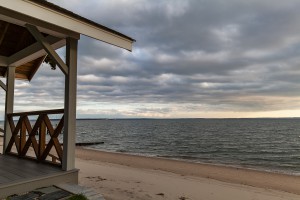 To contrast the fast feel of the time lapse, I shot some video of waves crashing over several jetties along the beach.  My iPhone 6 has a slow motion function.  You can choose a frame rate of 120 fps or 240 fps and the iPhone will slow that down to about one quarter to on tenth of real time.  It looks really cool on the phone!  But when I exported the videos to my Windows 8.1 laptop, I found that the iPhone does the slo mo processing internally and the exported video was just real time video.

After googling the issue, I found that since the exported video is a high frame rate video (I shot at 240 fps), you can import it into your video editor of choice and slow it down yourself.  I used Photoshop CC since I have the Creative Cloud photographer’s subscription to edit and compile my film.

Photoshop would only let me slow down to 25% of normal speed, so I did that, exported the video and did it again to get the slower speed.  I also did some tweaks to the video stream by boosting contrast, saturation and brightness. 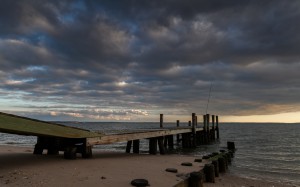 To create the time lapse video, I imported the 240 images of the first composition into Photoshop as a new video layer, set the frame rate to 24, and Photoshop did the rest.  Note that I shot raw, imported the raw files into Lightroom CC first.  I edited the first photo of the sequence the way I liked then synced that to all the others before sending them to PS.  I repeated the same workflow for each of the remaining three compositions.

Now that I had three slow motion clips and four time lapse clips, it was time to combine them in PS.  I dropped them into the timeline and made the fade transitions in between for a more seamless feel.  I created the title page and credits page as simple PS documents, two files for each.  Then I simply animated the transition between each document to get the fade in effect.  I dropped the title and credit videos into the timeline. 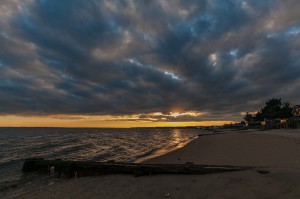 Finding royalty free music is a tough task.  I could you well known stuff, but uploading to YouTube, that site checks and filters copyrighted music (as it should.)  There are many royalty free music sites, but most are difficult to navigate to fins just what you are looking for.  Vimeo is one of the easier ones, and I could search not only by genre but by duration making it easier to find something that would fit into my video’s timeline.  I chose one and imported it into PS.

I rendered the video into a 720p film because 720p was the highest resolution the iPhone 6 will shoot in slow motion.

Mattituck, by the way, is a small town on the eastern end of Long Island’s North Fork.  For those who live on the water, it’s all about the bay.

Here is the final product: