Empire State Plaza is a complex of state government buildings in downtown Albany, NY.  The plaza was the idea of Governor Nelson Rockefeller and was built between 1965 and 1976 at a cost of about two billion dollars.

ESP is comprised of four Agency buildings, Corning Tower (the tallest building in Albany), the NY State Museum (aka the Cultural Education Center), the Justice Building, the Legislative Office Building and the Egg.  The Egg is literally an egg shaped structure that houses a theater.  The plaza itself is closed off to traffic.  There are several reflecting pools with fountains and an ice rink in winter.  As an architectural study, it is interesting, maybe even iconic to the locals, but it’s not likely to win any huge recognition for overall design.

I decided to spend an afternoon there with just one lens – the Canon 24mm tilt shift – to see what I could come up with for imagery.  The tilt shift lens is a perspective correction type lens favored by real estate and architectural photographers because it does not distort like a typical wide angle lens.  Your vertical and horizontal lines remain just that rather than converge from distortion.

In upstate winter fashion, the sky was very overcast, though some peaks of sun were forecast.  Gray sky doesn’t make for great background, so I did stay through the blue hour and into the evening for some different looks.  Framing a composition can be challenging.  For starters, 24mm is not super wide.  Then there is the height of some rather tall buildings.  One unique aspect of the tilt shift lens is the shift function.  Essentially, it allows you to move the lens left and right, or up and down, relative to the camera body.  So you can shoot several images and make a panorama out of them, giving you the effective field of view of a wider lens…in this case, more like 17mm.  I did use the shift function in all of my images.

First photo is the west side of the plaza with the four Agency buildings, taken from the upper outside level of the museum. 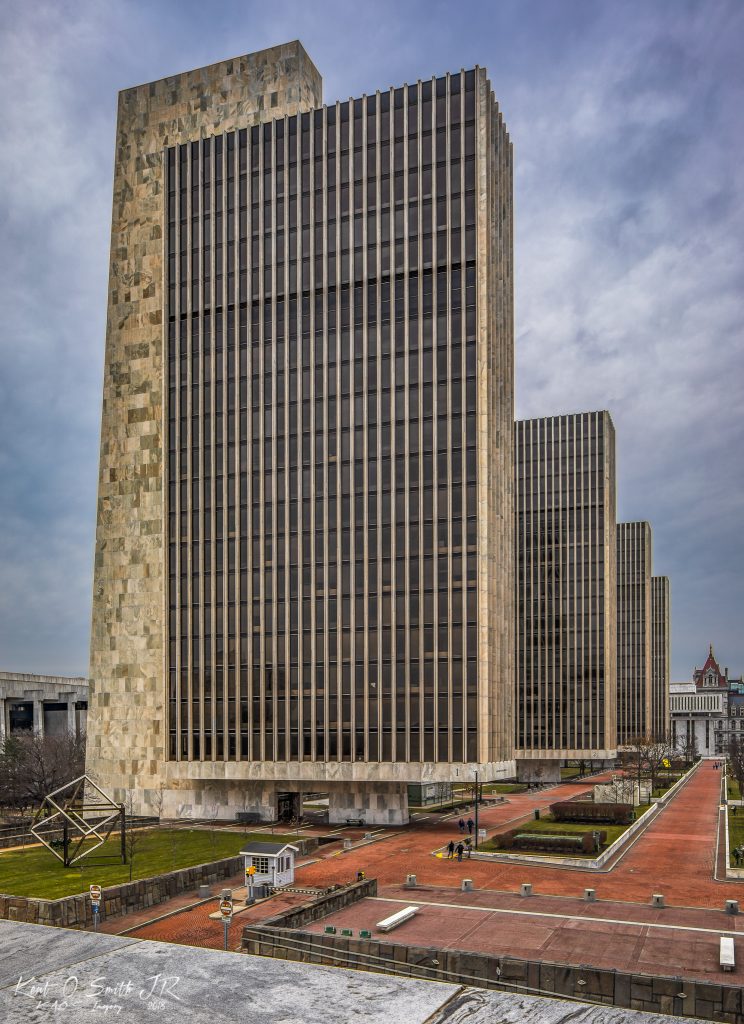 The red brick contrasted nicely with the blue gray sky.  A few people in the center foreground give a feel for the size of the place.

Since the sky wasn’t really interesting, this next image was converted to black and white to emphasize the structure of the buildings.  The archway is on the upper outside level of the museum, looking north to the Capitol building with the Egg off to the right. 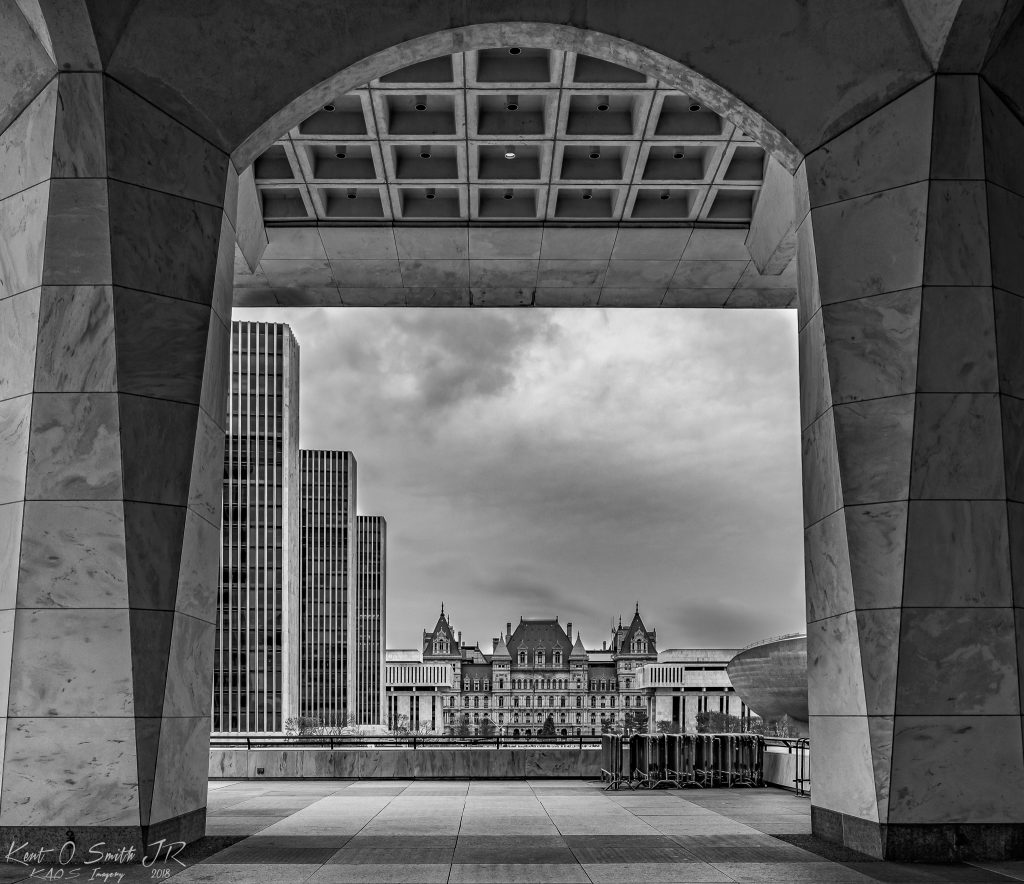 On the same level of the museum, and out side of the archway, the overhand nicely framed the Agency buildings on the left and the Egg on the right.  The blue hour made the sky a tad more interesting. 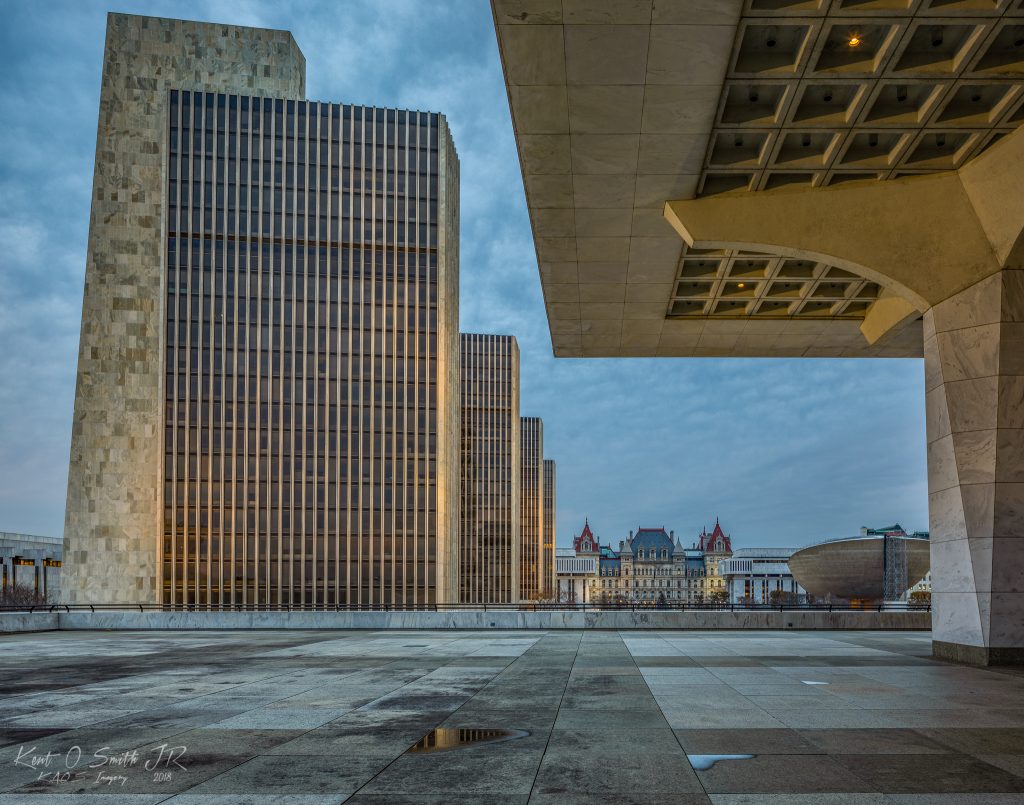 On the backside of the museum is a carousel.  I found a slow shutter speed made the lights on the carousel blur nicely into streaks. 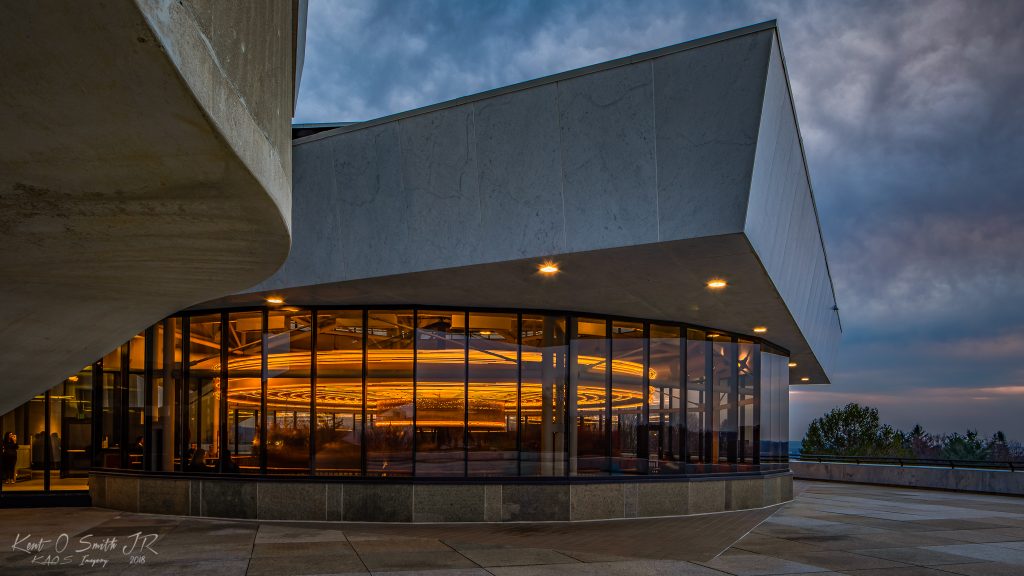 Here is a straight on shot of the museum from the plaza. 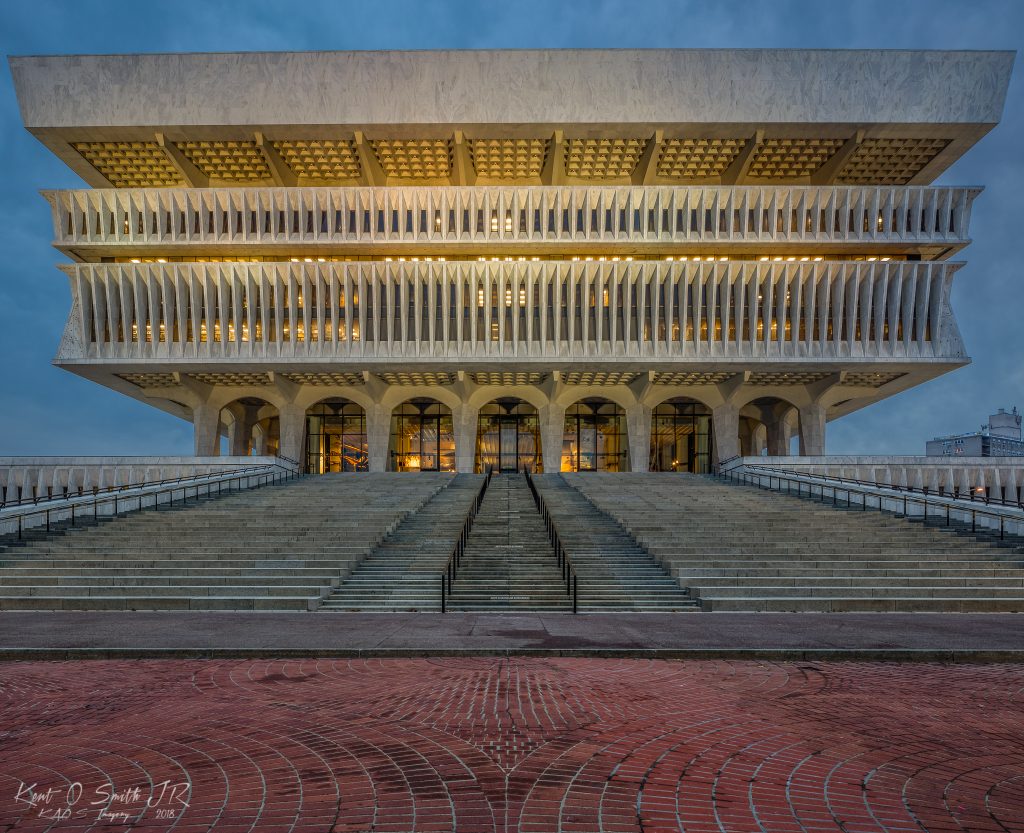 In this image, I chose to single out just one Agency building and show how it sits on a rather narrow base. 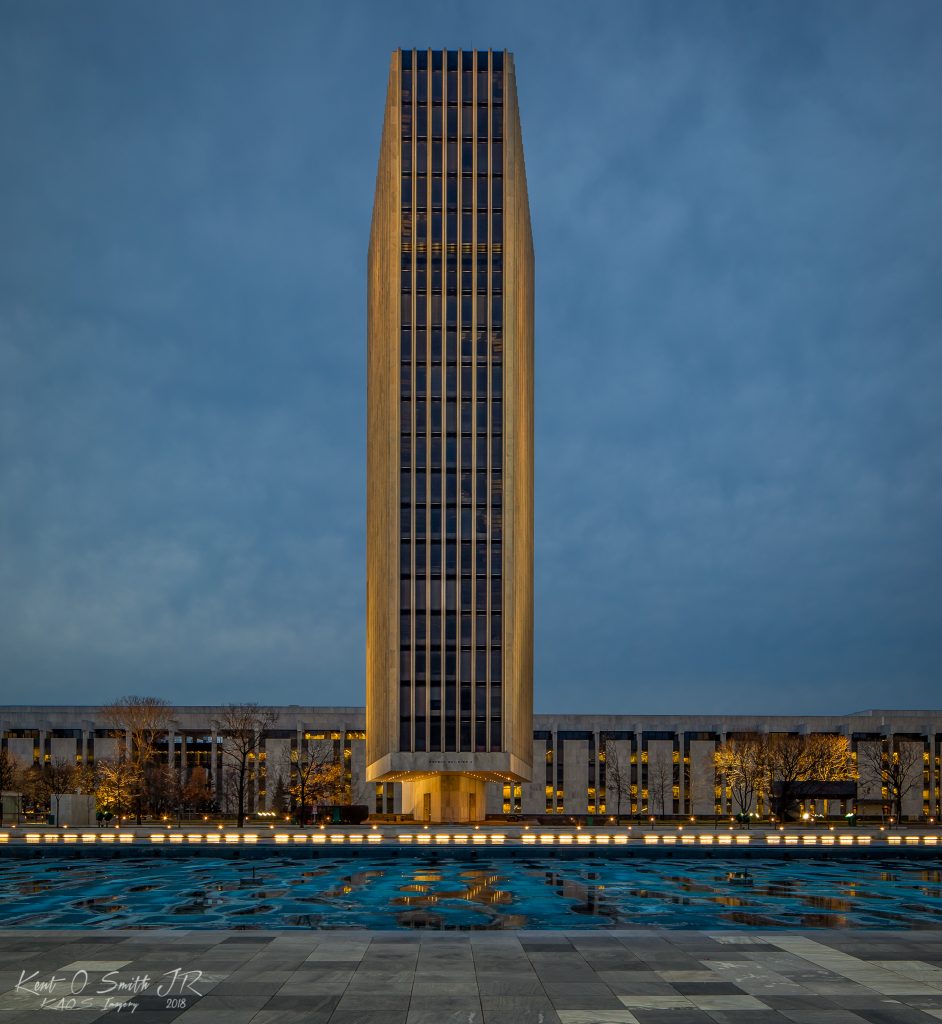 Eventually, darkness came.  Looking down from the elevated level of the plaza to the aerial road, there was a fair amount of traffic for a Saturday evening.  I chose a shutter speed of 15 seconds to capture the vehicle light trails. 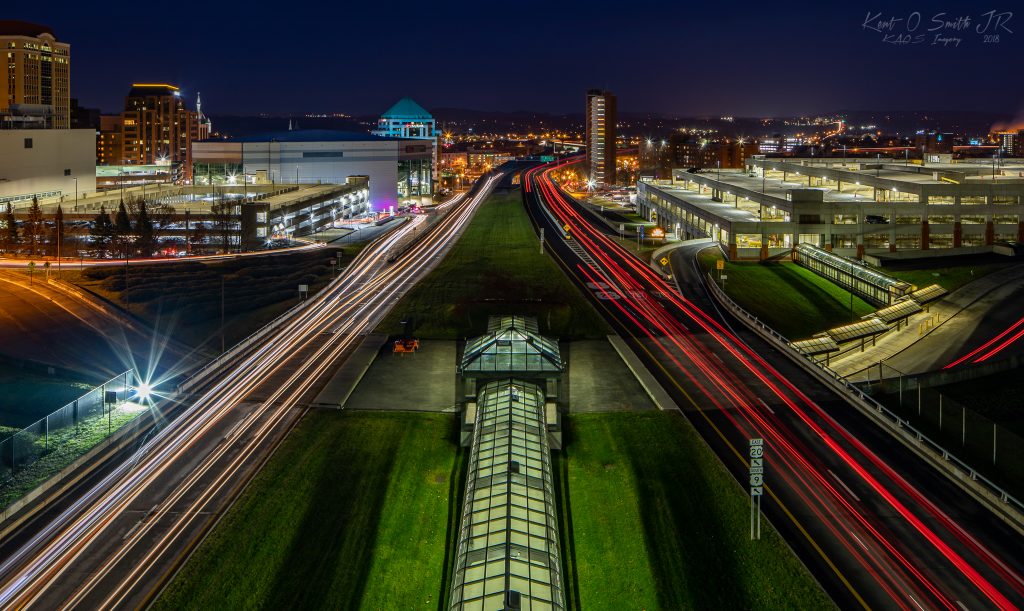 All in all it was a great afternoon working with the tilt shift lens.  The exercise shows that with some patience and creativity, you can come up with a number of good images in a single location with a single lens.  Of course, the plaza is a large enough area to give many possible compositions, but the idea is the same.

These shots are gorgeous and I really appreciate the commentary. Very nice work!!