The last year has been extremely busy with my real job, so I haven’t been able to get out and shoot near as much as I would have liked.  I missed the fall colors in 2015 completely, so I made time to get out this season.

Upstate New York experienced quite a drought this summer, how that would impact leaf color was a much talked about topic among local photographers.  Fortunately we had some rain in the early part of autumn and the colors were strong, though not the most vibrant that I’ve ever seen.  For some reason, they were spotty – meaning you could see nice color in one location and a mile away might still be green, or the leaves had already fallen.  Strange for sure, however, you might see great colors around the next bend which kept me traveling around the Southern Adirondacks in a constant search.

Always looking for that ultimate landscape, I visited many well known spots, but mostly struck out due to the hit and miss nature of the foliage.  As always, the weather won’t do what you want it to on a given day.  I took several afternoons off over the course of a weak chasing peak color in between overcast and rainy days.

Outside of the village of Speculator, NY, I noticed a little path off the main road that lead to a pond.  There was a lean to, a fire pit and crude boardwalk to a dock.  Since there were not any No Trespassing signs, I decided to check it out.  I shot a few frames with my iPhone to get an idea of composition when the fast moving clouds started to cover the light on the ridge behind the pond.  The wind and clouds changed a number of times, and after waiting patiently for over an hour, I was rewarded with some decent light that made the photo. 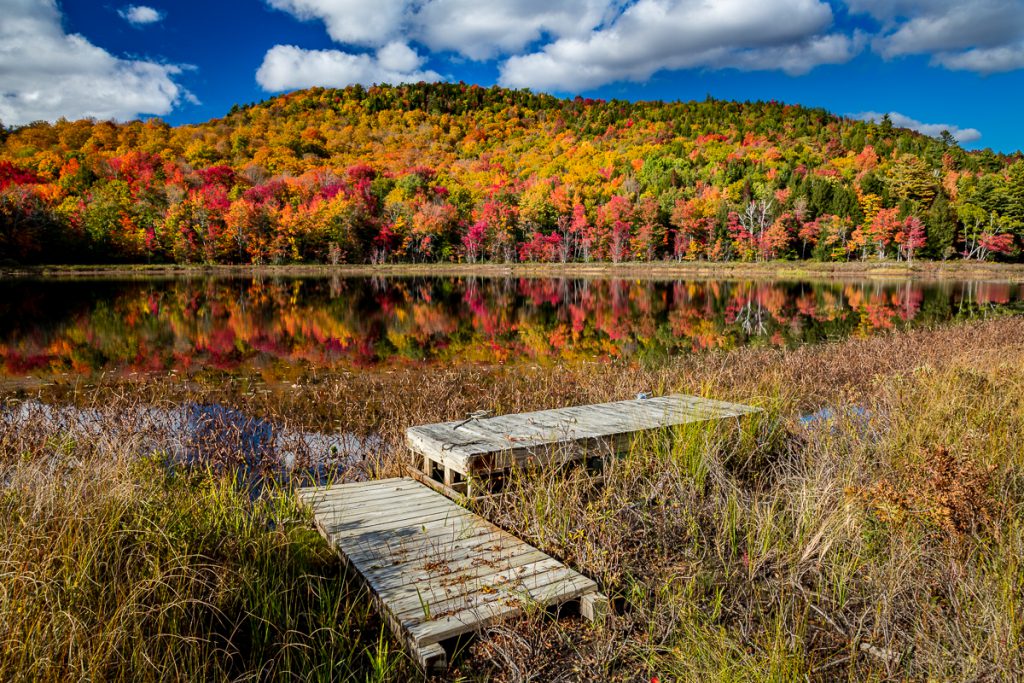 Heading further north on Route 30 towards Indian Lake, there was another small pond right off the side of the road with a little pull off area.  To reach the water, I had to climb down a small embankment.  The guardrail by the road was partially visible in the frame, so I moved to the left which kept man made items out of the natural landscape.  The curve of the shoreline coupled with the reflection of the foliage worked nicely creating a mirror image. 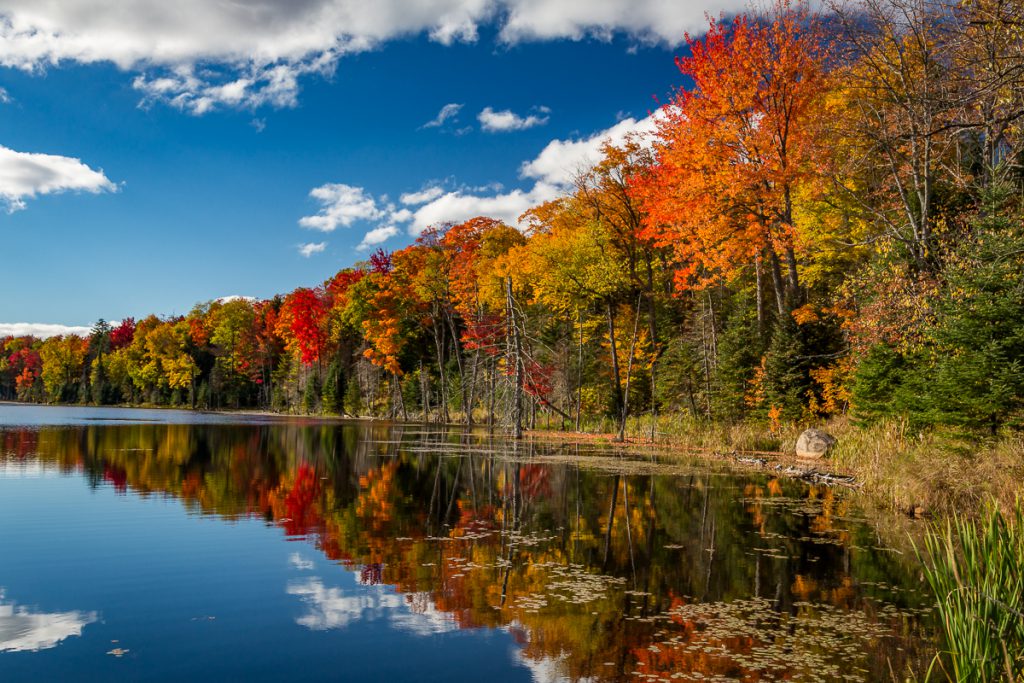 Still further north, the cloud cover had returned looking a little ominous.  I found a canoe launch site on Lake Abanakee that was in a cove.  The late afternoon sun lit the far shore and the dramatic clouds.  An old fallen log and sprig of grass in the foreground was kissed by a little light and I framed up a composition that incorporated reflections as well.  Then the sun went behind the clouds and it looked like the time for photography had ended. 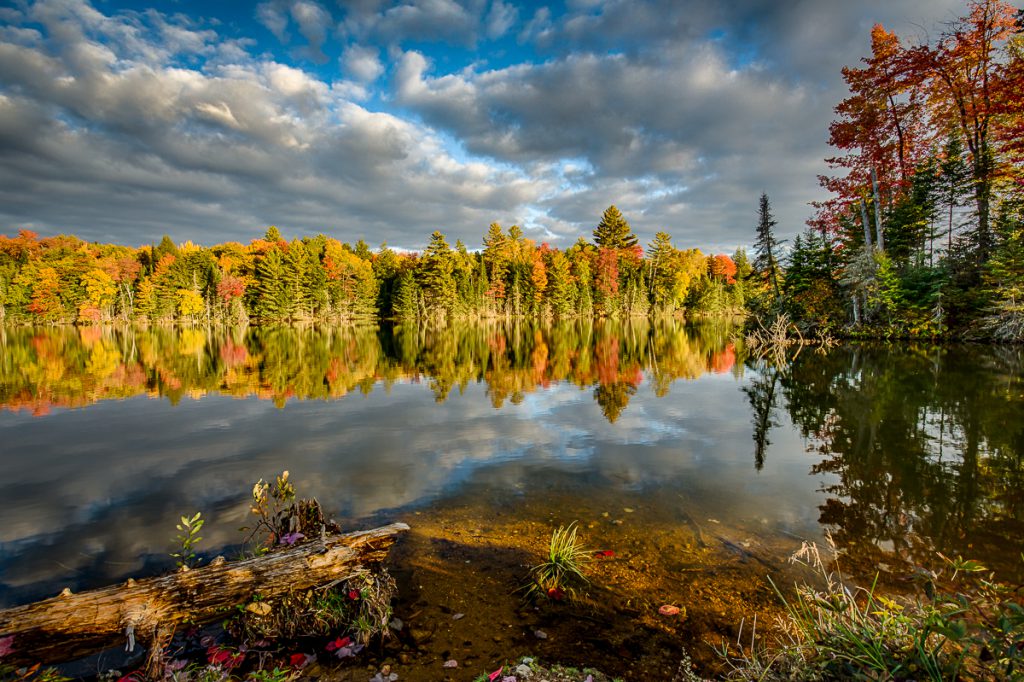 I drove back to the main road and started to make a left which takes you over a small bridge when I noticed the sun peeking back out, showering the shore on the right with golden light.  I hit the brakes, backed up on the shoulder and hopped out to take a look.  The lake immediately in front of me was pretty dark so a wide angle wouldn’t work here.  I mounted the 70-200 and standing on the bridge, framed up the trees, a boathouse and their reflections and fired off a nice shot. 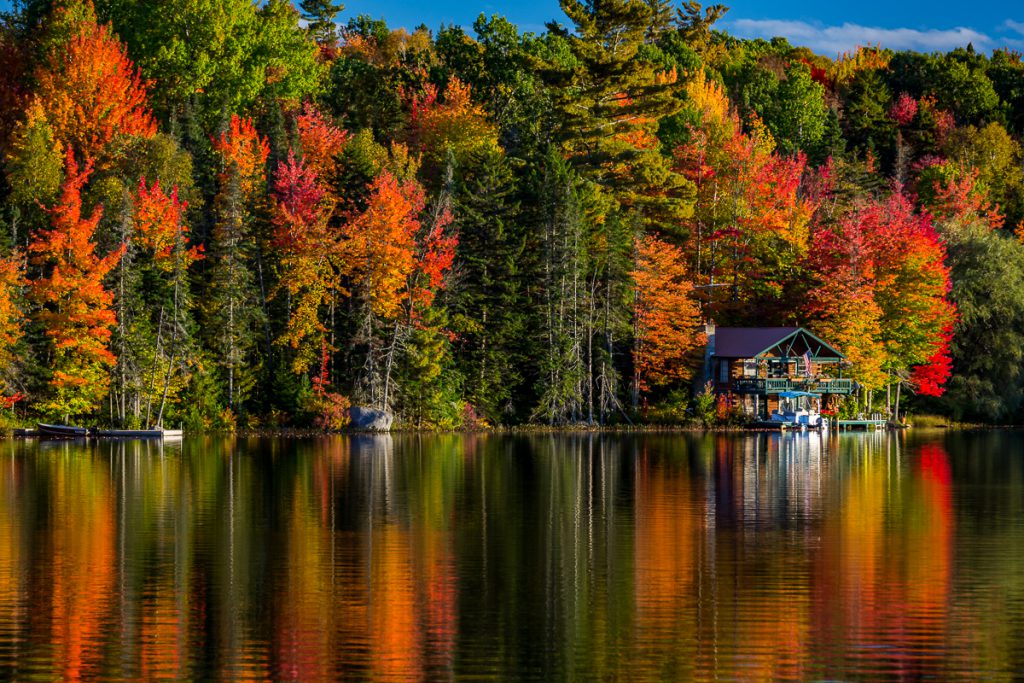 Another day, a photog friend texted to let me know he was thinking of hiking to a lookoff over Blue Mountain Lake.  I met him at the trail head and we carried too much gear up the thankfully not too long hike.  At the top was an enormous rock surface offering a great platform to shoot from.  There wasn’t a cloud in the blue sky.  Being early afternoon, the light wasn’t as nice as the golden hour, but we did manage to shoot some nice panoramas and tighter shots. 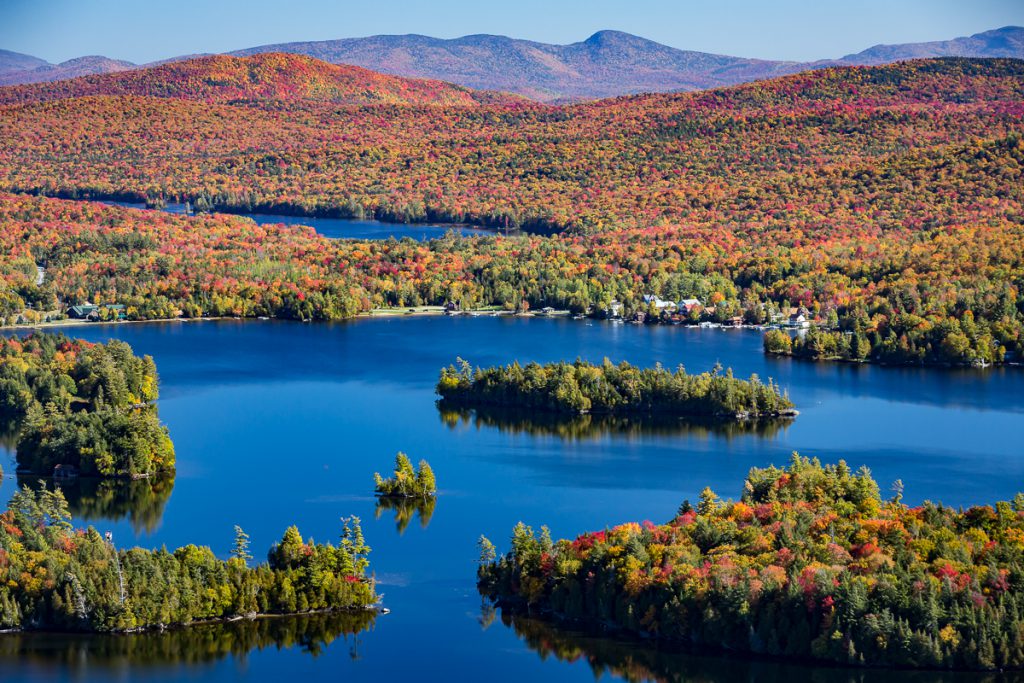 On the way back home, I stopped at a couple other locations that weren’t overly exciting but decided to try something different.  I fired up the Phantom 3 Pro quadcopter and sent it up to see what the landscape looked like.  Between 200 and 400 feet, there were some good views of the fall colors that looked like patchwork blankets across the terrain. 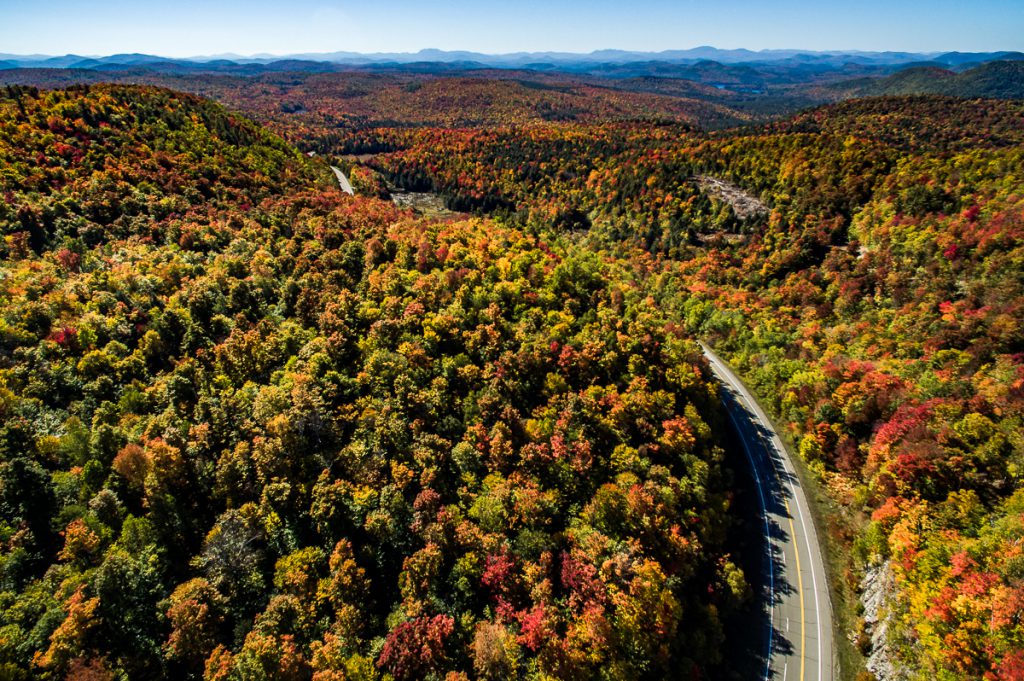 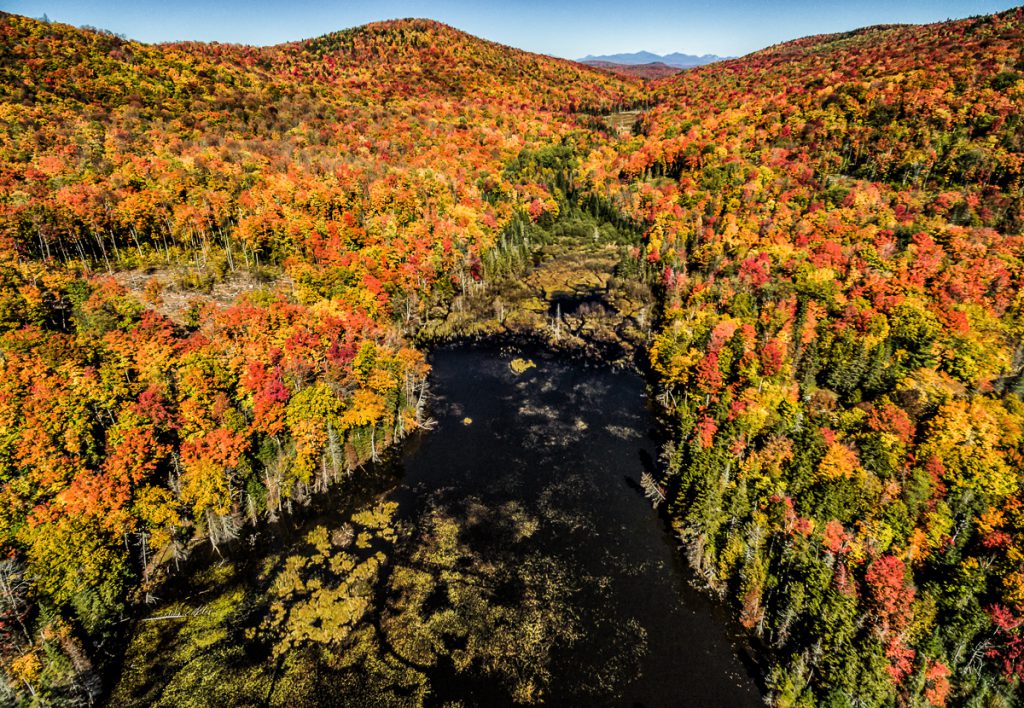 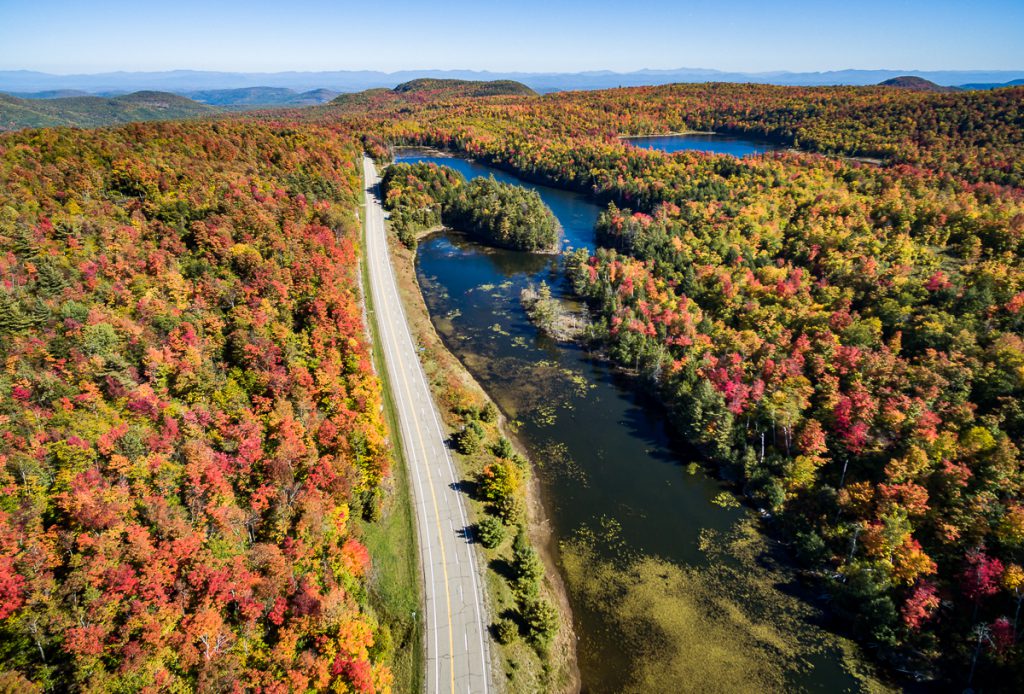 Feeling pretty excited that I had some decent fall foliage photos, I eagerly went home and processed them.  I share much of my work on Flickr, it’s not the best platform, but easy to use and easy to link to.  In the several years there, I have never had an image “explored.”  Supposedly there is some highly secret and technical algorithm that selects the 500 most interesting photos each day…and some say there is a way to work that algorithm…I don’t know, I’ve never tried.  So I uploaded my fall photos the usual way I’ve always uploaded photos, then went to bed.  In the morning, imagine my surprise to see one of my photos on Flickr Explore!  The funny thing is it was the mirror reflection shot that I took just off the main highway – not an exotic location – but for whatever reason, it became popular.

Despite the summer drought, the foliage was quite nice this year.  I am hoping for even more vibrant colors next year, and embrace the excitement of finding new locations to showcase that beautiful foliage.