“Clouds of the Apocalypse”

The longest lens I’d used to date was the Canon 100-400L.  The extra 200mm was significant, but there is certainly a learning curve, especially when shooting hand held.

There are bald eagles and other raptors indigenous to our area in the winter, so I thought trying some birding would be a good way to become accustomed to the lens.  My other half wanted to get out of the house, so she offered to drive my truck so I could be at the ready with the camera.

Well birding was bust.  We found some birds, but I could not get a sharp focused shot.  Later, I found out the lens was malfunctioning, a trip to Tamron service cured that.  Anyhow, we were about to head home since the light was fading and sun had dropped below the horizon.  I was in a bitter mood because the lens didn’t perform.  Then suddenly, the wife directed my attention to a weird cloud formation that was quickly moving in our direction.

The sun had set and it cast color into the sky, under this bizarre set of clouds.  I could see a shot coming…”Pull over!” I shouted and she did.

I scrambled into the back seat where the camera bag was, trying to remove the big Tamron as quickly as I could.  Without thinking, I grabbed the 24-10L, which is a great do it all lens….well do most of all lens.  I mounted that as quickly as I could, jumped out and fired off a few shots.

You could see the color already starting to fade.  The cloud bank was rolling quickly through the clear sky and very soon it would be past us.  There was a farm up ahead, no time to get close enough to make that a foreground item.  I started to walk out on the snow covered field so as not to get the street directly in front.  The curve of the road, however, lead your eye into the frame on the right side. 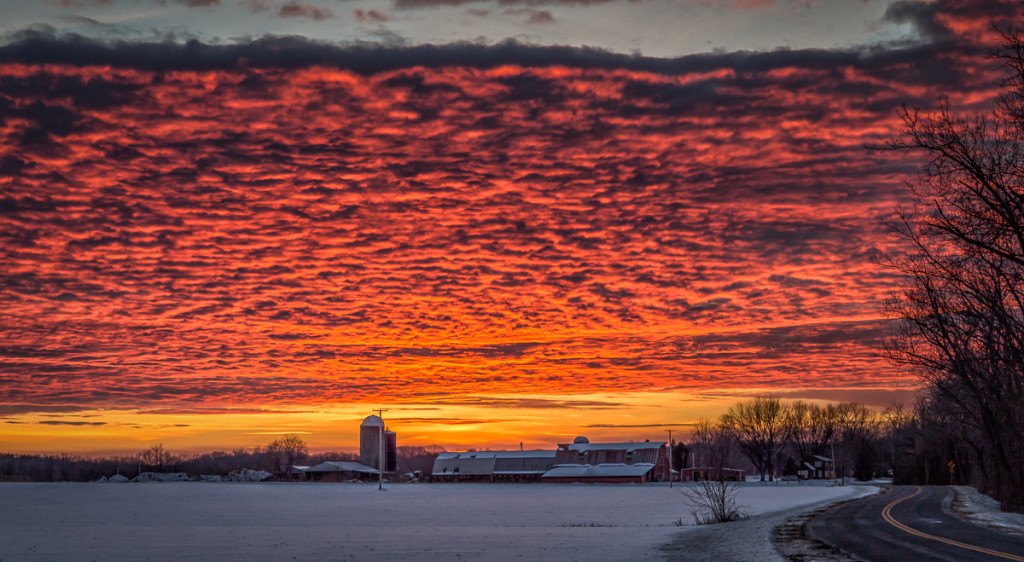 I took the shot.  The light level dropped rapidly and within minutes, the clouds had passed by and the color was gone.

The farm and road were a little dark, but I was able to bring them back in LightRoom.  So a sudden change in weather presented me with “Clouds of the Apocalypse.”