As Halloween approaches, I start to get all these cool ideas for a spooky themed shoot.  But ever busy, I rarely have time to follow up on those thoughts.  This year, I had a still life project for a client, so while setting up some Speedlites in my boatshop, I brought one of the images in my head to life.

Many times at summer antique boat shows, spectators will comment on how nice the varnish looks.  I’ve had conversations with strangers about getting the perfect varnish job.  One spectator told me the boat we were looking at had a killer varnish job.  That phrase rattled around my head all fall and my concept of “Killer Varnish” now had to be created.

There were a couple of boats close together.  I wanted one in the foreground with a can of varnish on the front deck.  I would get in the boat behind it and play dead.  Some fake blood on my arm would give the macabre feel.  I framed up the shot with the 5D Mark III on a tripod.

First thing was to get the varnish can lit.  I used a single in a mid sized softbox placed on a stand to camera left.  Phottix Odin wireless was used to control the power level of the flash.  I was happy with the lighting on the can, but the boat in the background was dark.

I set up a second Speedlite in a 47″ reflective umbrella.  The umbrella was mounted on a boom and placed over the second boat to simulate overhead lighting.  However, the side of the boat with the “Chris Craft” logo was still too dark.  To fill in that shadow, I used a large piece of white foam board propped up on a box on the floor between the two boats.  This allowed some of the overhead flash to bounce up on the side of the boat and not look too bright.

I attached the Camranger remote to the camera and climbed in the boat with my iPad.  I set the app to trigger the shutter with a 5 second delay so I could tap the shutter on the iPad and have time to put my head down on the steering wheel.  It took a number of shots to adjust the power level of the lights and to figure out a good placement for my arm hanging off the side.

Satisfied with the setup, I opened the tube of fake blood and generously applied it to my arm.  It was fairly thin stuff and ran down my arm, which looked cool, but I had a short window of time to get the final shot.

I got out of the boat, cleaned up my arm, and reviewed the image.  Pretty good, I thought, but it was missing something…I opened the tube of fake blood again and started some drips down the can.  I shot a few more frames as the blood slid down the can.  I also added one drip on the varnish brush.

The final image, I combined the shot with me in the boat with the my favorite blood can shot, making “Killer Varnish” a reality. 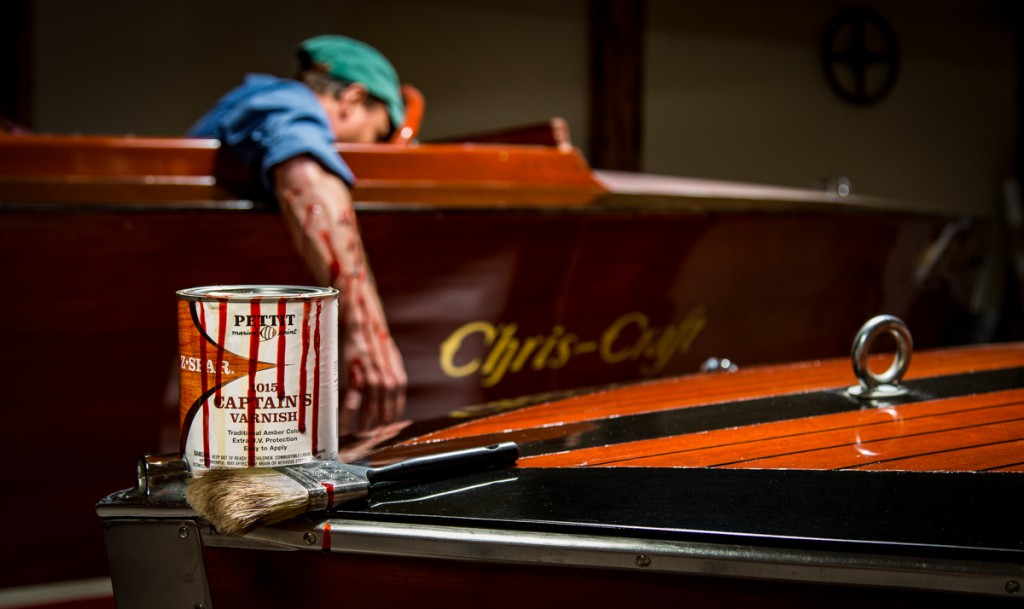