While visiting family on Long Island for Thanksgiving, I had the opportunity to do some photography.  My mother has a small cottage on Peconic Bay on the east end of the island.  The house was built in 1922 by my great grandfather as a summer home.  We are fortunate that it is still in the family.

Several houses east of us is a large estate with a good sized dock.  I have shot many photos of this dock from different angles and during different weather, but I had never done a long exposure of it.  With a fairly calm bay and mild temperatures, this seemed like as good a time as any. 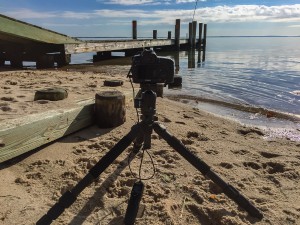 With the 5D Mark III and 16-35L f/4 on my tripod, I tried a number of compositions from a low viewpoint.  I incorporated an adjacent jetty into the scene as a foreground element as seen in the setup photo and an early result.  I liked the footsteps in the sand, but there seemed to be too many elements overall which became distracting…the viewer isn’t sure what to look at. 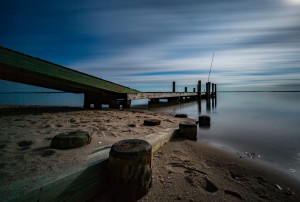 I moved closer to the dock which simplified things but I still didn’t have a warm fuzzy feeling about the low vantage point.  The shadows under the dock were very dark and didn’t add anything.  The feeling was amplified by the long exposure.  I tried raising the camera up so you could see the planking of the dock where the seagulls drop clams to break them open.  The shell fragments added a bit to the foreground.

By raising the viewpoint, I was able to add a better leading line – the dock itself – pointing out to the vast bay.  The nearby jetty was not visible.  The end result was a very minimalistic scene.  The long exposure made the calm bay even calmer and a nice reflection of the dock was visible.  There was a fiberglass mooring whip on one of the dock poles that I later took out in post processing because I thought I was distracting.

All my shots were taken in the early to mid afternoon.  There was low cloud cover that was moving at a slow to moderate pace.  I used a Lee Big Stopper ND filter to lower my shutter speed causing the clouds to blur nicely.  The water was a little too dark compared to the sky so I also used a three stop graduated ND filter to balance the exposure.  To further the minimalism of the shot, I converted the image to black & white. 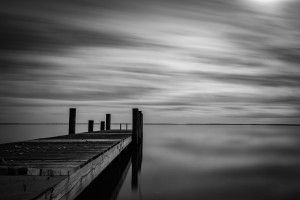