One of my passions is antique boats.  There is something about the gleaming chrome, the shiny varnish, the rumble of a vintage engine that gets my blood pumping.  Growing up with classic boats ingrained the interest in me, but years of working on them brought a whole new level of appreciation.

A boating friend is an avid collector but has decided it’s time to thin out the inventory, so he brought me his 1932 Gar Wood 28′ triple cockpit to get freshened up with new varnish and paint.  In addition to the service work, he commissioned me to photograph and video the boat because it was going in the RM Auction at Hershey in October.

First order of business was to get some detail shots of the hardware, interior, engine, dash panel, etc.  I moved the boat out into some nice sunlight and shot those while the boat was on the trailer.  The next idea was to run the boat on a local lake to get action shots.  This proved more difficult as it was almost impossible to coordinate schedules. 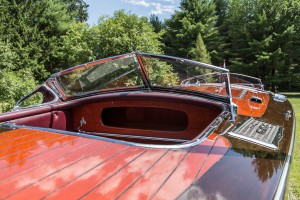 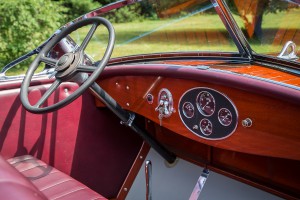 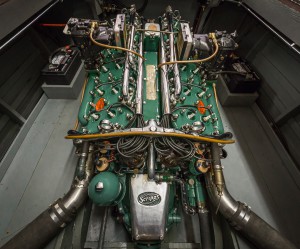 The calendars finally aligned, we had one shot to do this, and of course the weather hadn’t been informed so it didn’t cooperate!  Windy, choppy water and overcast skies mixed with harsh mid day light did not bode well for a good shoot.  Additionally, the owner wanted some video footage and we were planning on chasing the subject boat with the Phantom 3 quad copter.  Sometimes you just have to make do with what you have.

Rough water is a challenge to shoot in.  The Gar Wood did fly bys while I was in a fiberglass boat drifting in the wind.  I shot a 7D with 70-300L and a 5D Mark III with 70-200L on various passes at high shutter speeds.  I used shutter priority and Auto ISO with a single AF point selected.  High speed continuous drive and AI Servo focus were also selected.  Part way though the shoot it became so windy, the bow flag blew off the speedboat and they had to turn around to rescue it!  I tried shooting some video with a Sony Handycam but it was just too rough. 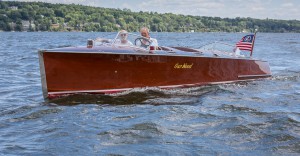 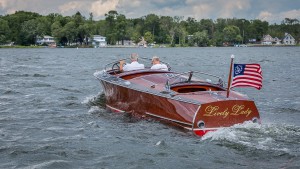 We headed back to the launch ramp to pull out.  No sense in flying the Phantom in this weather.  But by some miracle, by the time we arrived, the wind calmed down and the sun peaked through the clouds.  I ran to the truck to get the drone.

The wind calmed down…but that is relative.  It was calmed than before, but still breezy.  We had to be careful.  The fiberglass boat i was on had a long front deck, so I placed the Phantom on the bow and promptly took off with a high rate of climb.  Once in the air, it was stable enough.

I chased the big Gar Wood around the lake and managed to get some decent footage.  Landing the drone on the bow of a boat drifting on a windy day was another challenge, but thankfully it was uneventful.

I utilized the video editing function in Photoshop CC to make a montage of “Lively Lady” running and tracked an upbeat classical audio clip.  The still photos were published in the RM Auction preview catalog as well as on their web site, and the video was linked to.

“Lively Lady” is a beautiful example of a vintage Gar Wood runabout complete with period correct Scripps V12 power plant.  She sold at auction for $190,000.

Finally, here are a couple of stills pulled out of the video stream. 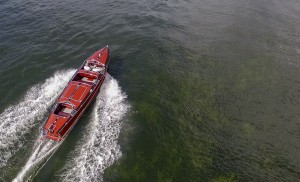 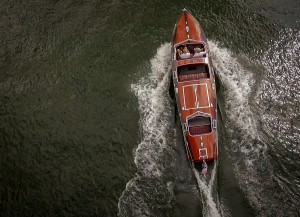