The busy summer blinked by.  Where did the time go is the perpetual question.  It seems like just the other day we were enjoying the Florida sunshine, but that was actually seven months ago!

I looked back over some of my images from the Keys and felt a sadness for the damage the Hurricane Irma inflicted on such a beautiful area.  My sympathies go out to the people who own homes and businesses in that area.  Hopefully, they will be strong and rebuild and I look forward to returning to the area perhaps this winter.

In any event, we decided to get out of town for a short vacation to Maine.  The plan was to visit friends on Lake Cobbosee for a few days, then head to the coast for a brief stay.  My better half, Marsha, loves lighthouses so I planned on seeing as many as we could in the short time we had available.  In between hanging out with friends and looking for lighthouses, we also intended to eat as much lobster and seafood as possible.

Due to an illness in the family, our friends were only flying in from the west coast late on the afternoon we were to arrive.  Instead of making a direct route to their house, we meandered along the southern coast as soon as we crossed the boarder into the state.  Based on the original thinking, we were going to pass through this area on the way home, but since we had time to kill, we made for the nearest lighthouse.

The Nubble, as it is called, is really the Cape Neddick lighthouse.  It sits on a jagged rock island about 100 yards from shore.  The only access to the island is via a chair lift on cables bridging the gap between the island and mainland.  We pulled into the parking lot of the park that looks at the light only to find it full.  That was unexpected for a Thursday afternoon, but after a few minutes, a kind fellow tourist offered us his parking spot.

Hurricane Jose was doing donuts in the Atlantic and the effects of the wave action were apparent here at the Nubble.  I spent some time clambering along the rocks by the sea to find a way to frame up the lighthouse without a tourist in the scene.  As the tide continued to push the waves closed to the shore, I tried some shots while dragging the shutter slow enough to get some motion blur in the water.  This shot turned out to be my favorite of the trip, mostly due to the perfectly clear blue skies the rest of the vacation.  Lovely weather to be out in, but not the best photographically. 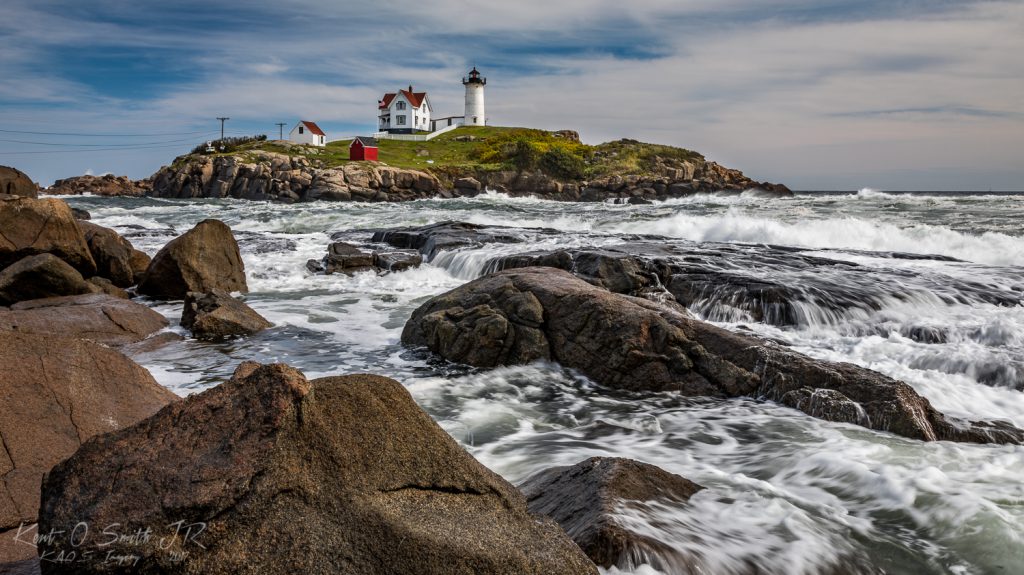 By this time we were starving and after passing a couple decent looking seafood joints, we finally pulled into a so so looking food truck parked on a grassy pull off.  You never know, right?  Well we had an excellent lobster roll and tried a crab roll that was equally good.  Appetites satisfied, we continued the rest of the way to the cottage on Lake Cobbosee.

The next few days were spent relaxing by the lake, eating some great food and spending time with good friends.  The weather was incredible, 80s by day, 50s by night.  One afternoon, we took the pontoon boat out for a little cruise that turned into a quest for eagles.  We spotted one juvenile, six adults and two nests on this relatively small lake that is 12 miles long.  It was difficult to get close to them, either the shoreline was rocky or the birds felt spooked enough to fly off.  Of course, being early afternoon, the light was spectacular, though I did manage a decent portrait of one high up in a pine tree. 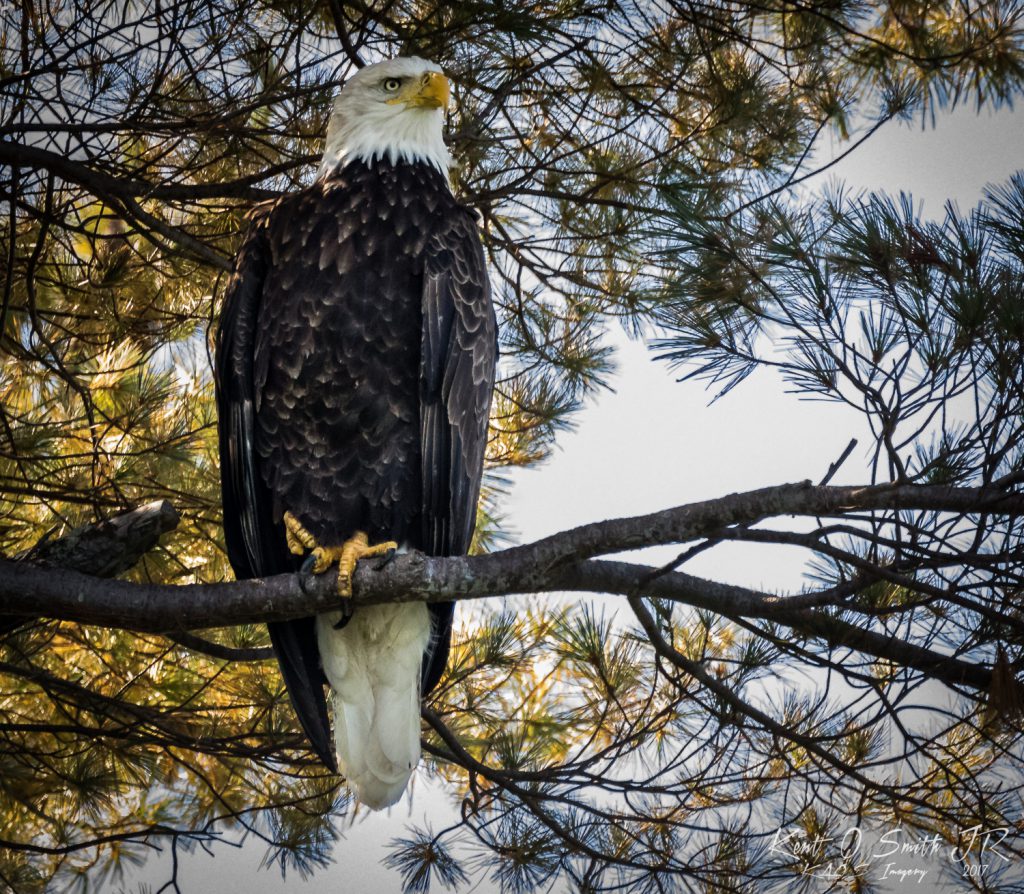 Late that afternoon, a few clouds rolled through and the sun kissed the shoreline with nice golden light.  I decided to break out the Phantom 3 Pro and fly a ways out over the lake to capture the light hitting Horseshoe Island.  I was short lived, fifteen minutes at best, and sun sunk down behind the clouds.  I was fortunate that a lone boat was passing by the island just before the light left. 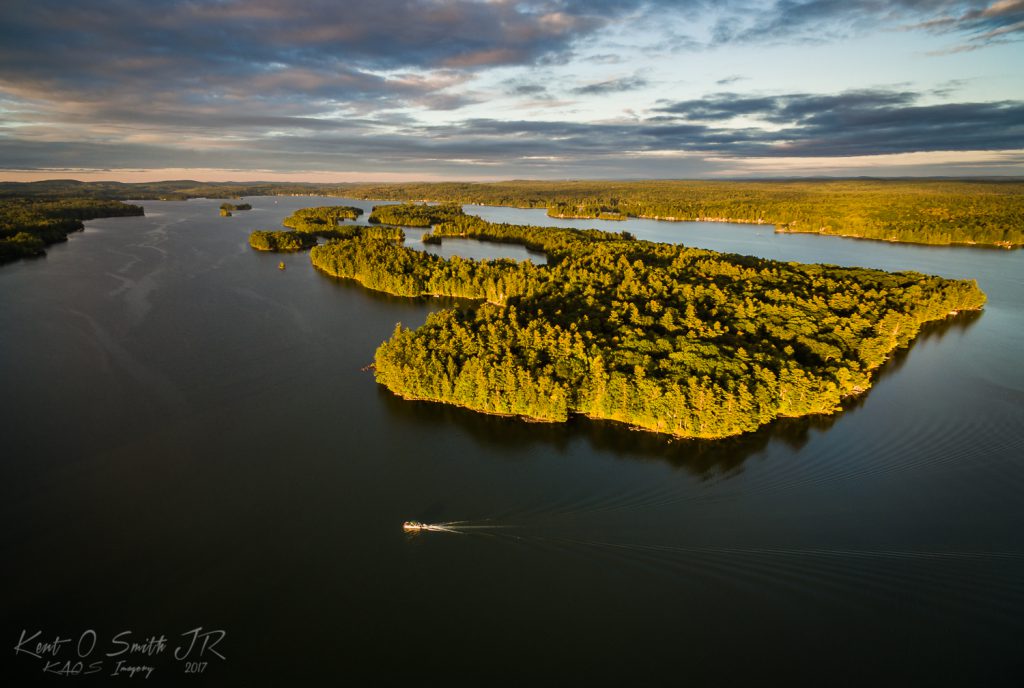 While on vacation, I’m usually not much of a morning person – well I’m not much of a morning person all the time, but even more so when vacationing.  One morning while sipping my first coffee and reading the news online, I glanced out at the lake and saw the morning sun illuminating the shore to the south, a few vapor trails and some nice blue sky.  So I grabbed the DSLR and snapped a pre-second-coffee shot that came out rather nicely. 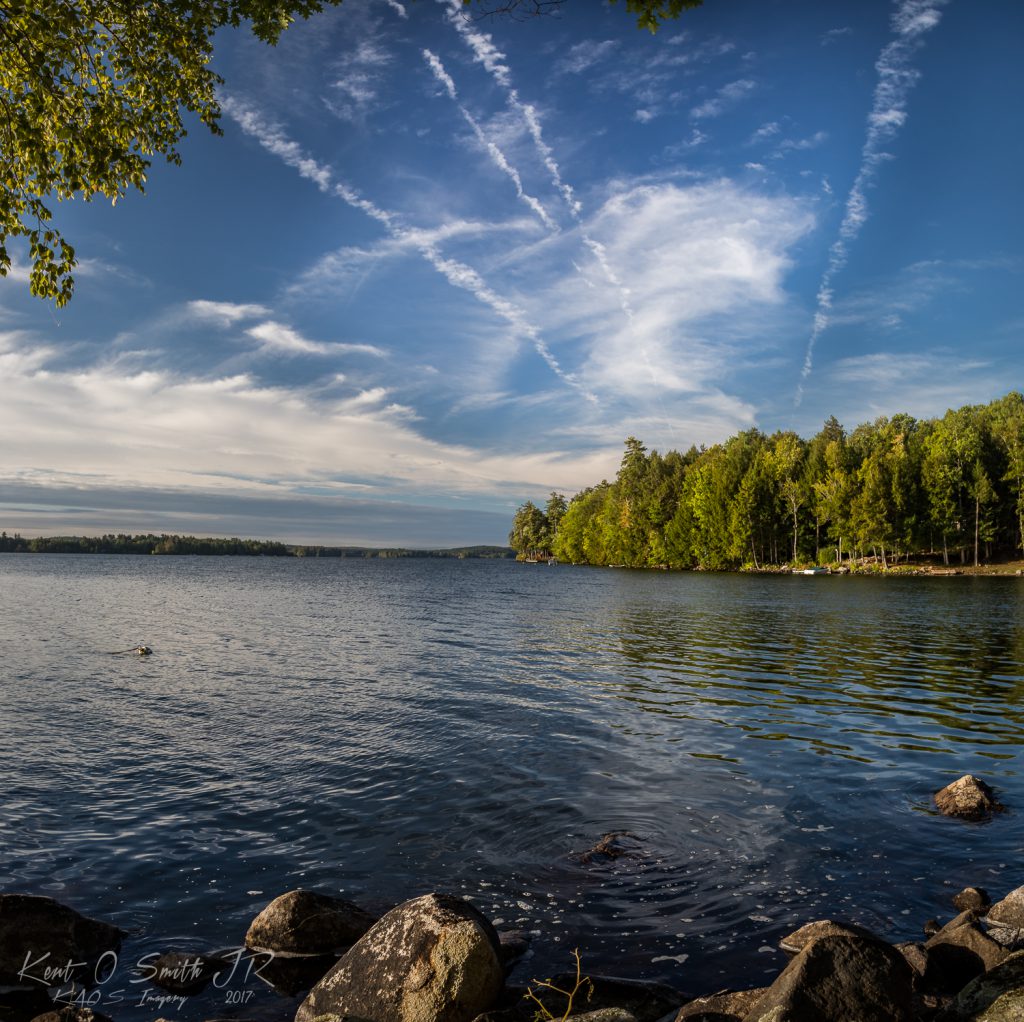 The next morning we left early for the coast.  Starting in Camden, we tried to hit most of the major lighthouses all the way south to Boothbay Harbor.  Hazy blue skies and harsh light made for challenging photo opportunities, but we thoroughly enjoyed the site seeing.  In Rockland, we hiked over 3/4 of a mile to the breakwater light, I can only dream about the photo ops there under the right conditions.  As the day progressed, time seemed to go by faster.  We had to forego a couple of lighthouses to save enough time to get to the well known Pemaquid Point light.  The rock formations there are mesmerizing, and the better part of the afternoon was spent exploring them near the breaking waves.  I tried some more longish hand held exposures and captured a nice wave blasting over a rock ridge.  Marsha was trying to do some close ups as the water ran up a trough and wound up knee deep in a sloosh of seawater.  While there, I of course had to get a shot of the world’s most photographed tidal pool with the reflection of the lighthouse in it. 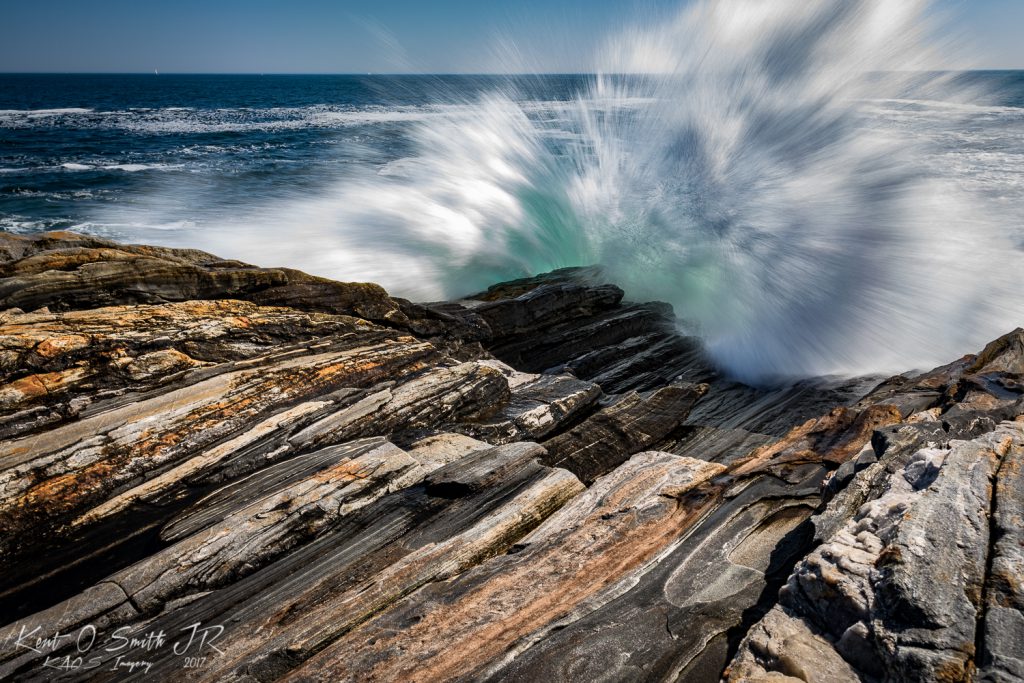 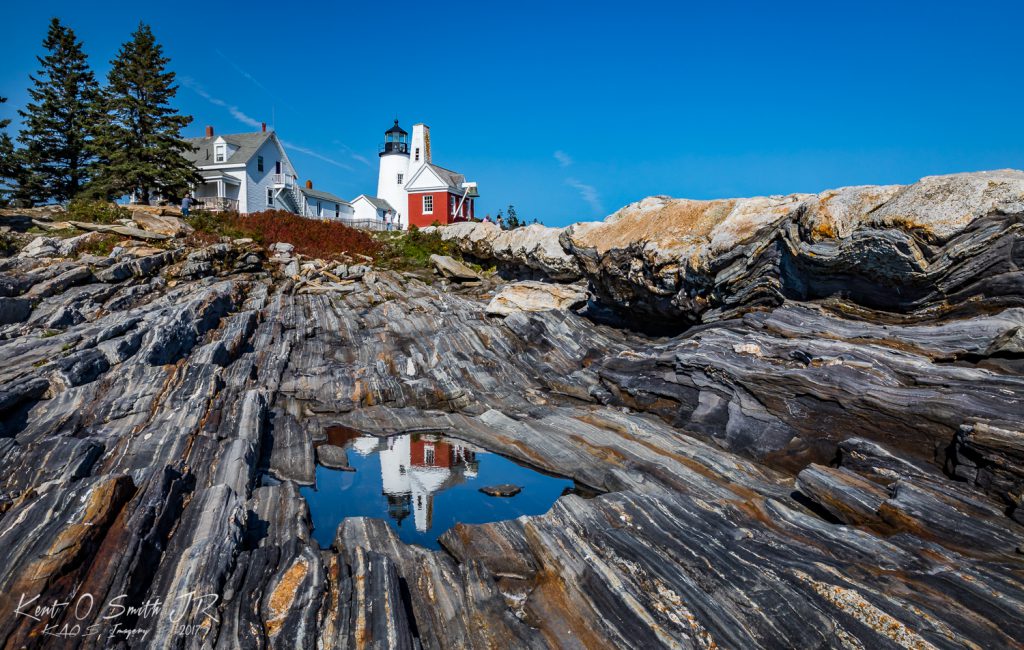 We ended out last day with a stayover in Boothbay Harbor.  Another lobster roll as a snack then more seafood for dinner, so much for the diets.  Again, hazy cloudless skies were above us, the haze did make for a nice orange glow from the setting sun over the harbor. 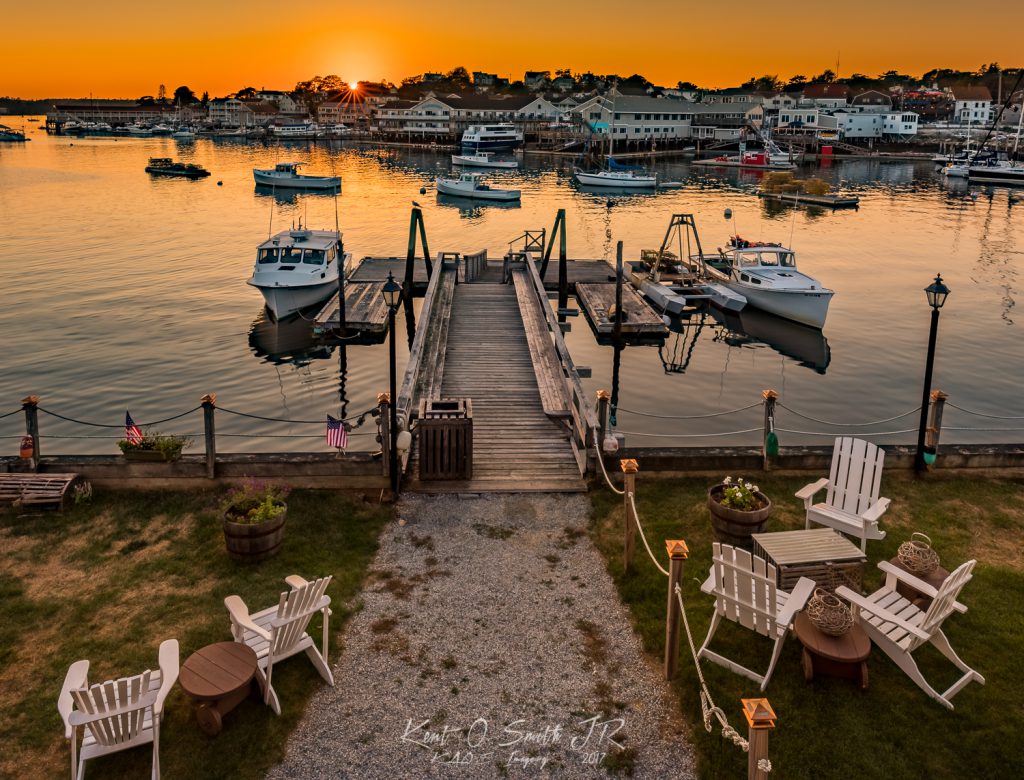 As always, the vacation was too short and I look forward to exploring much more of the scenic Maine coast.