One of my hobbies is go fast outboard boats.  I have a vintage 1983 Shadow 21 with a Yamaha 250 outboard that runs in the mid 70s.  There is an annual go fast gathering on Great Sacandaga Lake each June, usually 60 or so boats attend.  They come in sizes from 13′ to the mid thirties, some are outboards, some are stern drives, but they all go….fast!

Shooting go fast boats can be challenging at best.  Aside from the speed, you need to be close enough to the action which typically means shooting from another boat.  Conditions can be rough and windy.  While you could shoot with pretty much any camera, a DSLR with a good burst rate will be an advantage.

At this year’s meetup, an acquaintance who has several go fast boats purchased a 20′ pontoon boat to knock around with in the summer.  He kindly offered that as a shooting platform.  In the past, I’ve shot from another go fast boat, but their cockpits tend to be cramped for a photog with a couple of cameras.  The pontoon was a luxury place to shoot from.

Rocky drove the boat, I gave him instructions on where to locate us relative to the action.  The pontoon had a nice picnic table that I could lay gear out on, plus left and right bench seats in the front, nice on the knees and I could put a camera down without looking but knew it would be safe.  A pontoon is also quite stable due to the nature of it’s design.  We publicized an impromptu shoot for 6 pm when the light was getting pretty good.

The first problem was – not many boats showed up!  It was cocktail hour for many, others were still running around the lake, and some simply forgot.  Since it was an impromptu shoot, we take what we can get.  Those that showed played for the camera time and time again.  We located a reasonably calm stretch of water and the participants proceeded to take turns doing fly bys.  The light was nice, we were close to the action. 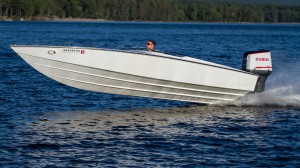 Broadside shots are not as appealing.

The boats were running in the 60-80 mph range.  They came so close to the photo boat that I could feel the spray as they passed by.  The next issue to deal with was fitting the boat in the frame.  From their starting point, they were too far away, which is fine, they have to get up to speed.  As they close in to the photo boat, they get larger in the frame – quickly – and when they are close to me and broadside to the camera, they are so close that I cannot fit much of the boat in the frame.  I believe that a full broadside shot is not as interesting as one where the boat is coming into or exiting the frame on an angle.  I still shoot some broadside shots, the guys like them (especially if it’s their boat), but I find the other shots more compelling.

I shoot with two camera setups.  The main workhorse is a Canon 7D with the 70-300L zoom.  The 7D shoots at 8 frames per second and the AF tracking is quite good.  I also use a 5D Mark III with 70-200L zoom.  Being full frame, I lose the reach of the crop sensor, but the image quality from the 5D3 is so much cleaner than the 7D.  The two compliment each other.  The wider setup lets me get shots when the boats are closer.  The 5D3 shoots 6 frames per second, noticeably slower.  You just have to time your shots a little better. 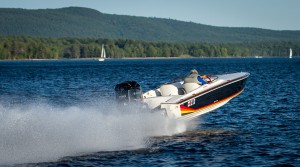 Entering or exiting on an angle makes a more compelling shot.

Settings wise, I use the same basics:  center point AF only, continuous high speed drive, AI servo – I want the autofocus to constantly track the moving boat.  You can use an expanded AF point or and AF group, but I find those options can get confused and lock on the water or the background.  Center point is perhaps harder to hold on a high speed boat, but tends to be more accurate when you do.  I shoot in Tv priority and set ISO to auto.  These boats are moving fast.  In order to stop the action, you need a shutter speed of 1/1000 to 1/2000.  You can also use a slower shutter for a panning shot, but those can be difficult at best when shooting from a moving platform.

Auto ISO and letting the camera select the aperture allow for correct exposure given the selected shutter speed.  I’ll chip a few shots from time to time and adjust exposure compensation as needed.  Some boats are light, some boats are dark, and you are tracking a boat at changing angles to the sun, so constantly monitoring your results is necessary.

Watch for distracting background elements…the pontoon boat should be removed.

Composition is not in the forefront of my thoughts.  Depending on location, there is almost always a distracting background.  I crop that out where possible, or minimize the background when it doesn’t add to the photo.  In post processing, if there is a buoy or boat or other object that distracts, I will remove it in Photoshop.  I shoot in RAW so typical processing is required to bring the most out of a given shot.  Where possible, I will try to crop it so the boat is coming or going at an angle as well as crop out sky, land, water, etc, if it doesn’t contribute to the overall look. 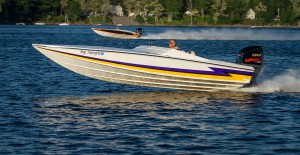 The boat in the background adds to the photo.

Often I will use a circular polarizer when shooting on the water.  It cuts glare and deepens the sky and clouds.  But you have to watch what direction you are shooting, CPLs work best at right angles to the sun.  You can get the sky on one side of a shot darker and nicer looking than the other side, it just depends on that angle.

Like anything else, experience and practice make for better shots.  Do it enough and you’ll be good at it.  As challenging as it can be, it is rewarding to produce nice images.  The guys with the cell phone cameras think your camera takes good pics.  The camera is like any other tool, one needs to know how to use it.