A good photo friend messaged me one day.  He was bored and wanted to go shooting with someone.  I’m always up for that!

I asked Jon what he wanted to shoot.  He didn’t seem to have any pressing ideas, so I gave him one.  He had done some urbex photography in the past and I always wanted to give it a try.  So I made the suggestion.

Jon was willing to be the tour guide.  I met him in Amsterdam and loaded my gear into his truck.  “There’s an abandoned power plant near here, real easy to get into.  It doesn’t even have any posted or no trespassing signs up.”  That sounded good to me, I certainly didn’t want to explain to some cops why we were in a building that was obvious we shouldn’t be in.

On the way, Jon gave me the brief history of the power plant.  It was a coal fired type that created steam that drove massive generators.  It was used to supply electricity to local mills before electricity was common place in the city.  We arrived and sure enough, it was easy to get to.  You could park less than a hundred yards from the building.  First we surveyed what was left of a raised rail way where train cars would bring the coal to the plant.  Then we walked right in the main entrance which wasn’t even boarded up. 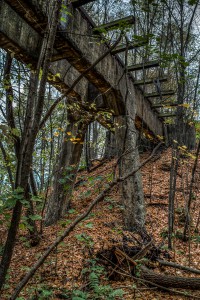 It took a few minutes to let our eyes adjust to the darkness.  Pretty much too dark through most of the building to hand hold the cameras, so we were shooting from tripods.  Jon brought an LED flashlight so we could see our way in the darkest areas, plus it was useful to light a subject so the camera could achieve good focus. 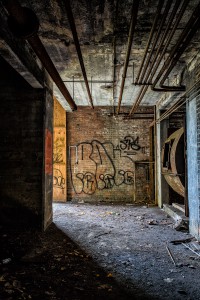 Not far inside, on the lowest level, there was a rusty steel staircase going up.  The ambient light coming through the windows on the next level illuminated the stairwell almost perfectly.  Further in, part of a brick wall had come down creating excellent framing for the room beyond, which had a good deal of natural light. 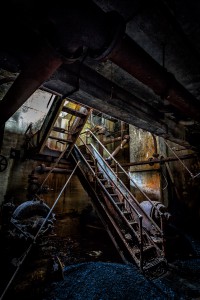 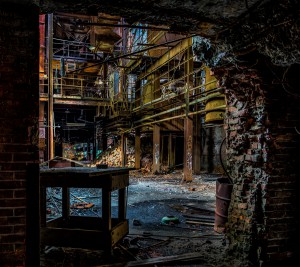 Upstairs, we found the main control room with the huge General Electric generators still in place.  There had to be a ton of scrap iron and copper that could be salvaged!  The upper platform over the generators is where the plant operators would have worked from, switches and gauges lined the walls. 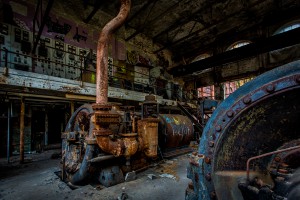 At the far end of the plant, we saw the gigantic hoppers where the coal was stored before being fed into the furnaces.  There was still a good amount of coal there.  We also found a shovel and a couple of buckets, someone had been helping themselves to the remaining coal. 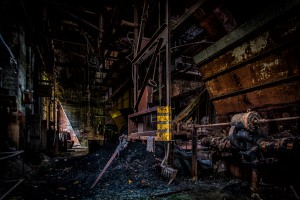 While it was evident that many others had been in the building, we fortunately did not encounter any vagrants or rodents!  Obviously, urbex photography can be dangerous, you never know who or what you might encounter in a building, or even if it is structurally sound enough for you to walk through it.  Not to mention, trespassing is illegal.  But there is a certain attraction to witnessing firsthand an abandoned site and pondering the history of it.  And it is most rewarding to have the opportunity to photograph such a place before it potentially disappears.