My good friend Larry is the President of the local chapter of the EAA.  EAA is the Experimental Aircraft Association, original started as an organization for homebuilt planes, it now encompasses those as well as vintage and typical small production aircraft.  This local chapter has fly ins at several private air fields in the area and Larry asked me to attend with the ulterior motive of having me bring a camera.

Over the summer, I was introduced to several venues and many EAA members.  The private airports are really just grass or dirt strips in someone’s backyard….well, a really big back yard.  I soon learned there were many aviation enthusiasts with their own planes that participated in these events.  Most events were held in conjunction with a breakfast or lunch, and certainly not at ideal times of the day for good light.  But shooting small planes was something new to me, so it was instantly appealing.

One of the larger venues is near Hagaman, NY.  Labor Day weekend was the chapter’s annual pig roast, so Larry invited me and fed me well.  Being one of the larger chapter gatherings, Larry thought it would be a cool idea to get some shots of the airport – from above.  He found me lying on the ground, shooting a restored Grumman T-6 trainer with a wide angle lens.  “Darryl is going to take you up in about 15 minutes so you can get some aerial shots.”  Oh, great.  15 minutes to overcome my long time fear of flying…in something far less than a puddle jumper!

So I used to like flying until after 9/11 when travel became a chore.  The paranoia of being on a jetliner that could potentially be highjacked was real for me.  I’d been in small planes once or twice, but back when I was a teenager…well, let’s just say that was quite some time ago.  I got up, brushed the grass off my jeans and looked to the left at Darryl’s plane – and my stomach lurched.  It was the smallest plane on the field!  Not to mention a kit plane – homebuilt.  This wasn’t going to be fun.

Darryl’s bird is a CGS Hawk.  It’s essentially an ultralight kit plane, though you can purchase them ready to run.  It’s a fabric on frame design, only weighs about 310 pounds.  Pack in two adults and a couple of cameras and the weight more than doubles.  A 40 hp motor can push the plane a cruise speeds up to 75 mph.  “We’re taking the doors off so there’s nothing blocking your view,” Darryl says as he *unzips* the fabric doors with clear plastic windows off the aircraft.  Normally, I’d be sucking down a vodka on ice at this point – but – when it’s time to perform (get photos for Larry), one has to pull it together. 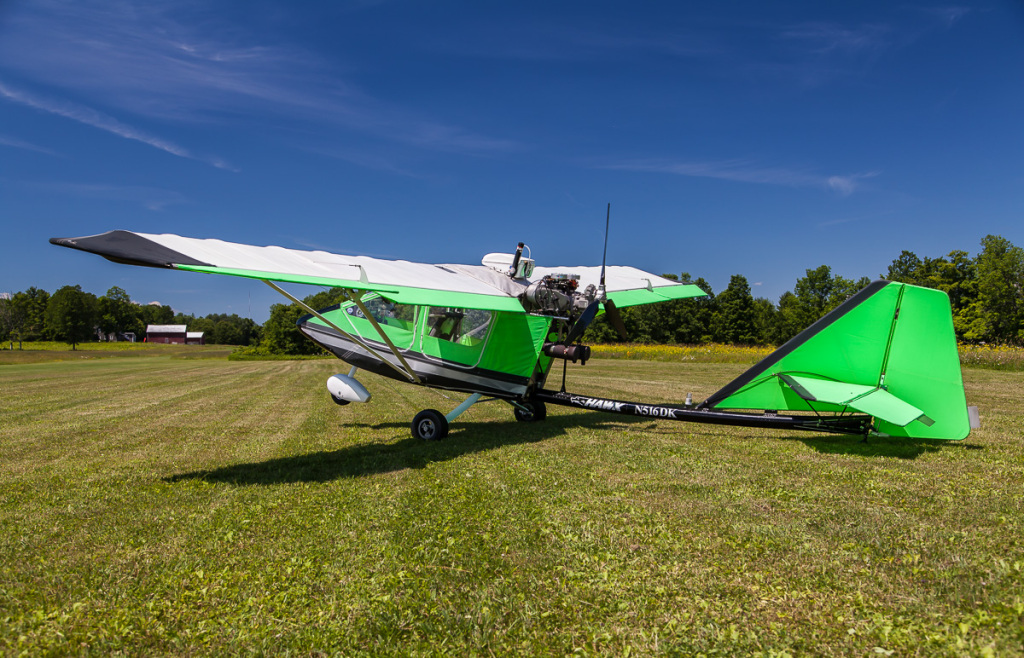 I asked Darryl a couple of innocuous questions about his flight experience and the plane, just a way to break the ice.  Mentally, though, I’m trying to quickly figure out what body and lens combos I want to take with me.  I quickly decide on the 5D Mark III with 70-300L which will give me good reach if we fly high and the 5D Mark II with 24-105L for the wider perspective.  Both are fitted with circular polarizing filters.  Darryl looks at me and says “Hop in!”  He holds my gear and shows me where to put my feet in the cramped cockpit.  It’s an inline configuration, he’ll be sitting in front of me. 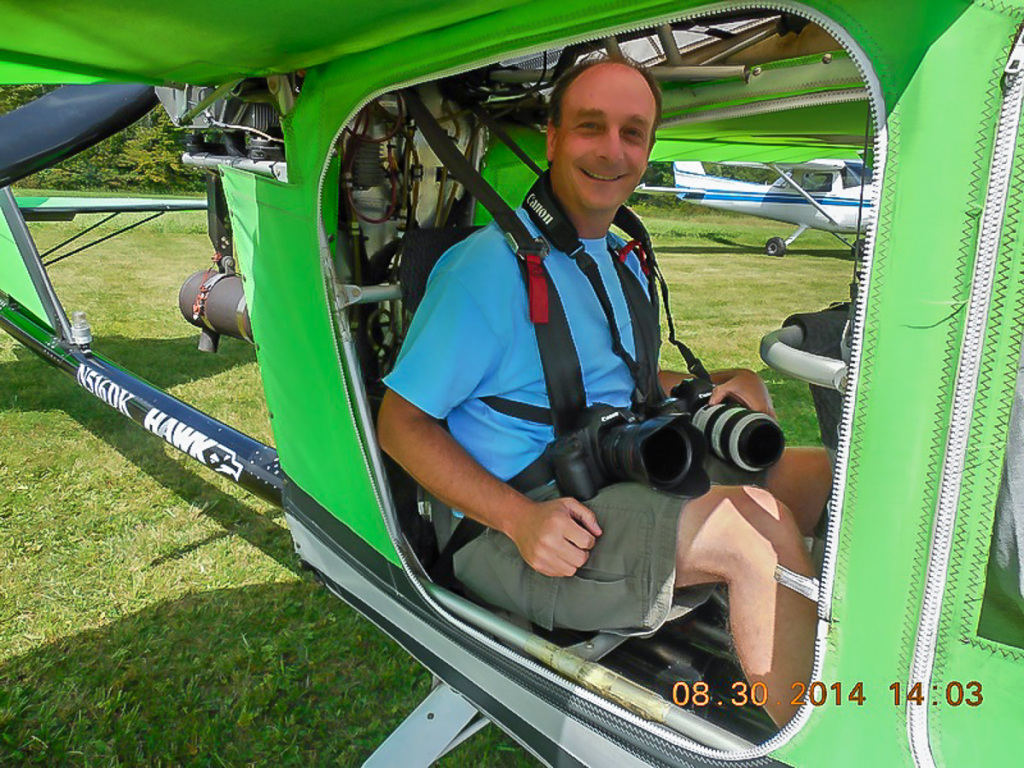 Before being strapped into the harness, Darryl gives me my gear back so I can strap that in too.  The 5D2 is on my Black Rapid strap…the 7D’s OEM strap is around my neck, and I’m holding the cameras so tight my knuckles are turning white.  Darryl clambers into the front seat and hand me a headphone set that will allow us to talk during flight.  He tells me we will take off, buzz the field at a low altitude a couple of times and also do a higher altitude flyover for another photo op.  Then he fires up the engine…

…and taxis down the runway.  He’s talking to someone (Larry?) on the radio who is broadcasting to other aircraft to stay clear as we do the aerial photo shoot.  Meanwhile, I’m concentrating on settings – Av or Tv mode?  What ISO?  Center focus point or not?  I decide on center focus point to start, Av priority, and do a couple quick test shots with the 5D2 to see where we’re at.  After a quick review, I decide we’re good to go…just as Darryl says we’re clear for takeoff! 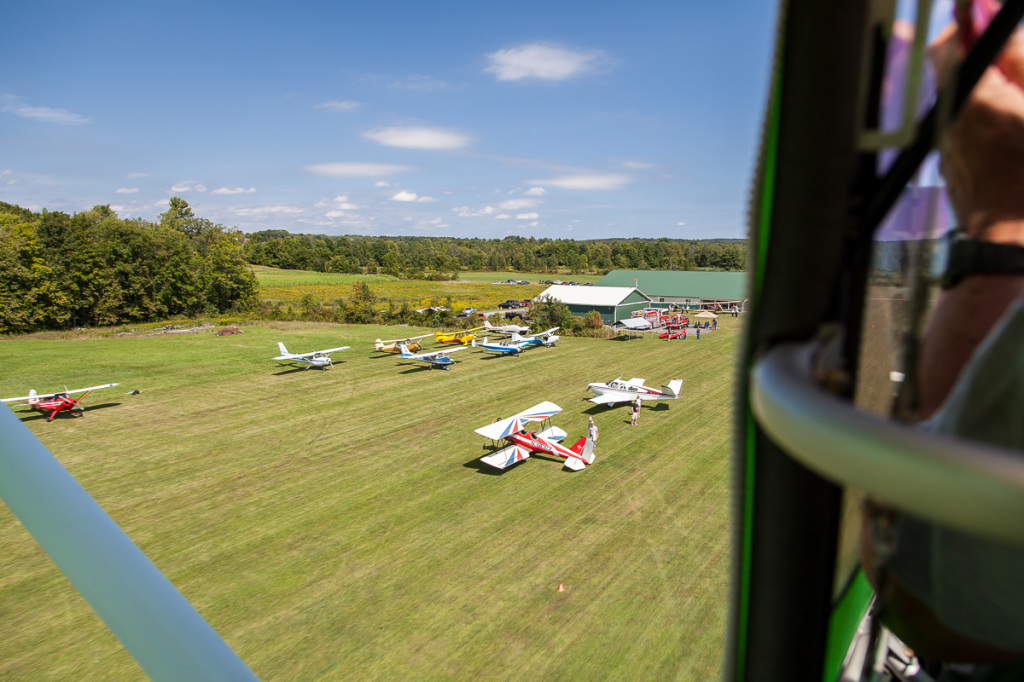 And we’re up.  Smoother than the last commercial flight I was on.  Slowly gaining altitude.  Buzzing the field.  I start firing away.  The first thing I noticed while shooting is that it was a good idea to remove the lens hoods.  There is some air turbulence inside, due to the doors being off.  I had removed the lens hoods simply because there really wasn’t much room in the cramped cockpit.  But if the hoods were on, the wind would catch them, potentially moving the camera around. 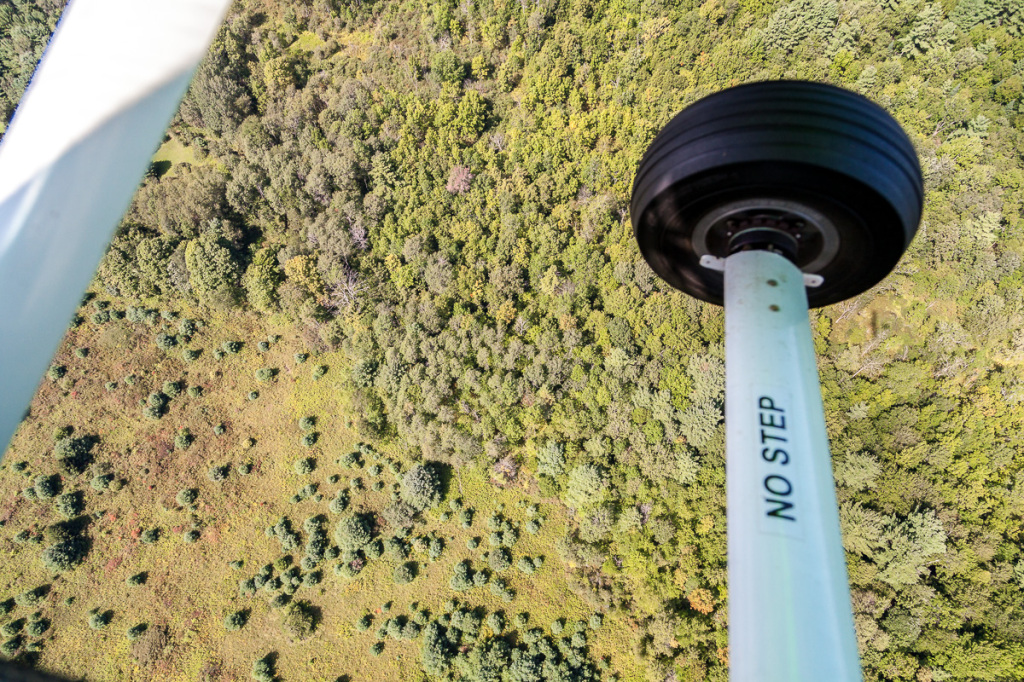 We fly over the field a few times.  It was readily apparent that the 70-300L was too long for most shots.  Also, the longer focal length was harder to hold steady.  The Hawk is a push type design, the engine in the back.  So sitting in the back, I clearly felt the engine vibration.  After a few more shots, I reviewed them again and noticed some were not as sharp as they could be.  The engine vibration and wind was taking it’s toll.  I upped the ISO a couple of stops to bring up the shutter speed. 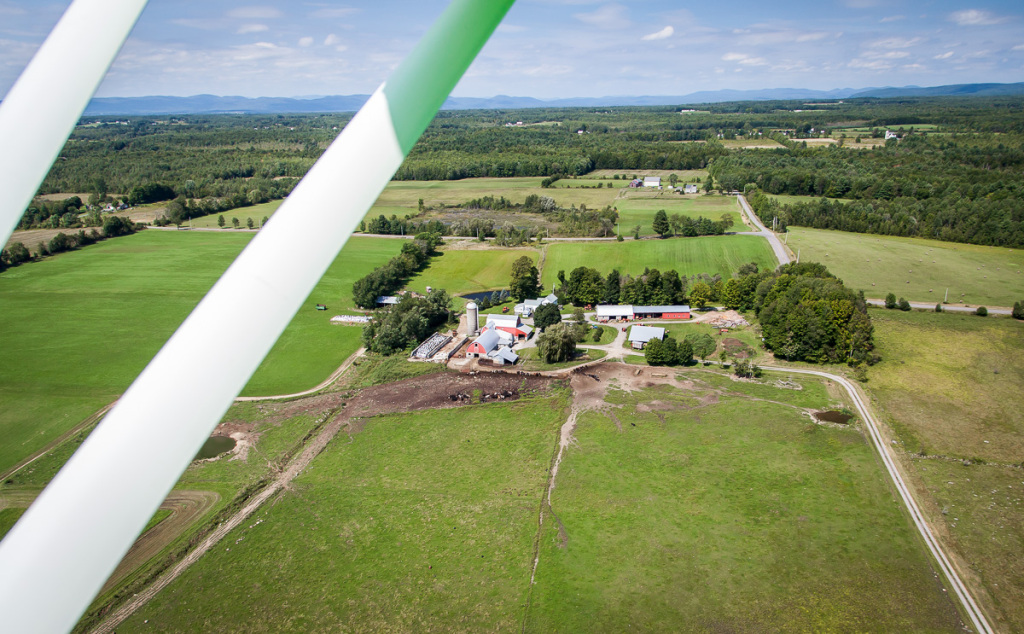 Following each pass, we did a lazy circle back around, giving me the opportunity to see the surrounding countryside from a unique vantage point.  I snapped shots of a farm, roadways and the mountain range in the distance.  Twenty minutes of flight time later, Darryl made the landing approach, and as we turned to line up, I could look right up the runway. 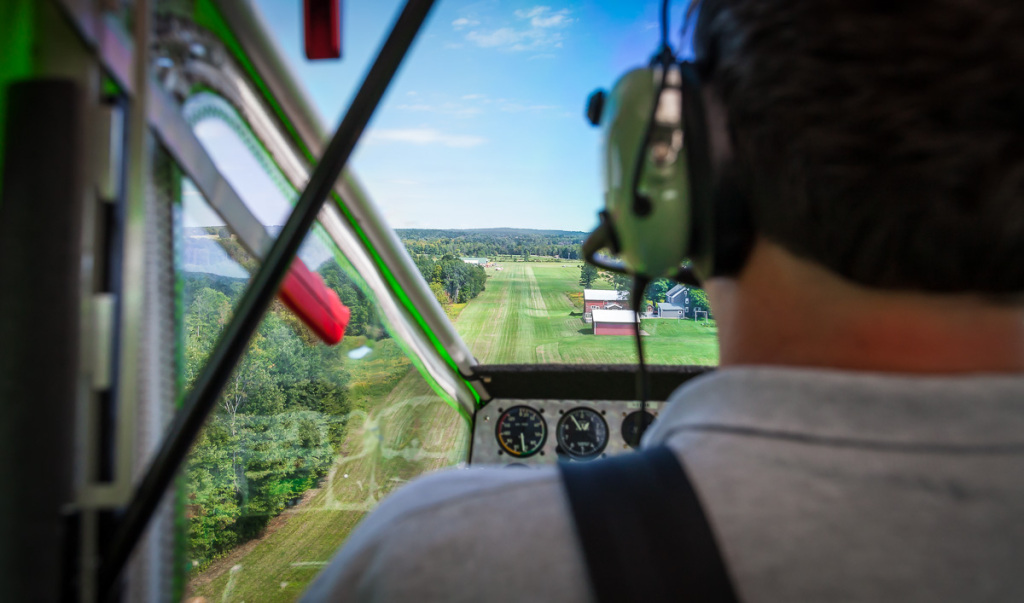 Moments later we were safely on the ground.  For a second, I hardly remembered that I had even been flying – the photography instincts kicked in and all I concentrated on was getting the shot.  All I remember about the flight is that it was smooth and liberating and had wonderful views.  We parked and Larry asked me, “How was it?”  I replied, “Where do I buy one?”  Fear of flying no more. 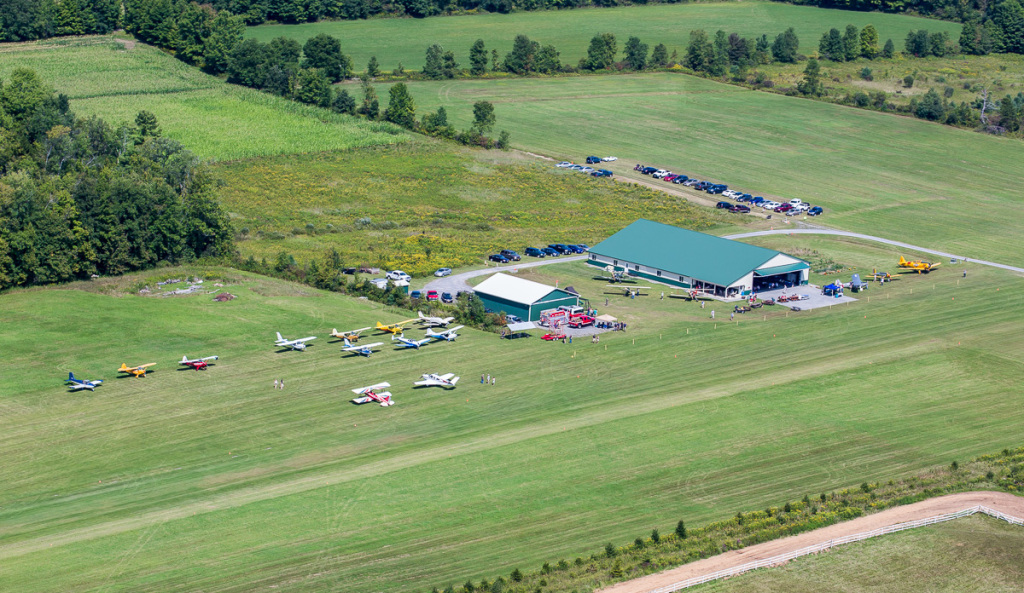 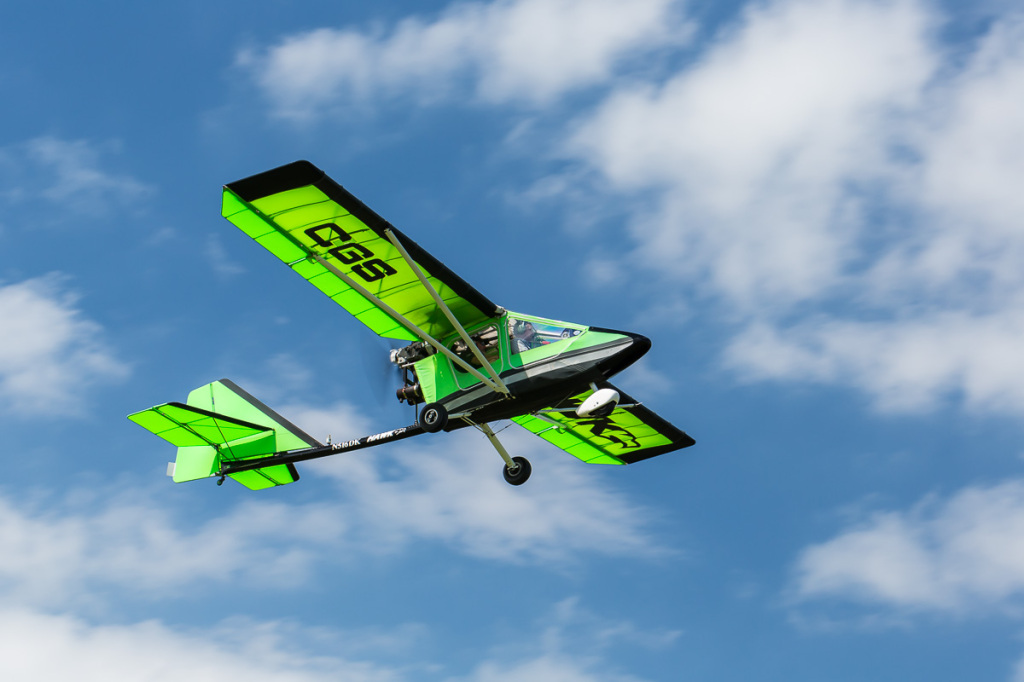