Lake George is well renowned for classic wooden boats and vintage raceboats are no exception.  The lake has hosted several Gold Cup regattas over the years, the most famous was a three year stretch where Bolton Landing resident George Reis thrilled spectators with the infamous “El Lagarto.”  1935 was the last time he won the race and it was on his home turf.

A modern replica of the famous “El Lagarto”

Several wooden boat enthusiasts and businessmen from Lake George decided to do a recreation of the 1935 Gold Cup 80 years later.  They invited original vintage raceboats as well as modern reproductions and held the Gold Cup Festival in September of 2015.  A race course similar to the original was set up in Bolton Bay by the Sagamore Hotel so spectators could see from several onshore locations. 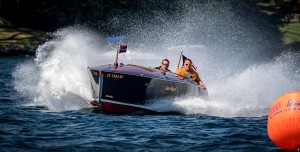 The weather in upstate New York can be anything in late September.  This year there was Indian Summer temperatures around 80*, but unfortunately a strong southerly breeze kicked the good size waves on most the race course.  This prevented the smaller boats from participating, but made for some dramatic photos of the larger racers plowing through the choppy waters.

I shot from aboard a 24′ pontoon boat so that we could move around the course and cover different angles.  It was so rough, we took water over the bow several times.  That made for challenging shooting conditions.  I had intended on using the Tamron 150-600mm for some shots but the conditions were too unstable to hold it steady enough.  I also brought the Phantom 3 for some aerials however the wind never relented so the quadcopter never flew.

My primary camera was a new 7D Mark II that I’d only used for some test shots around my yard.  I brought the tried and true 7D just in case.  The lens of choice was the 70-300L.  We were limited to how close we could get to the action, that’s why I wanted to use the Tamron.  To my happy surprise, when I downloaded the 7D Mark II files, the resolution was excellent and I could heavily crop without losing much quality.  I shot in shutter priority, keeping the speeds at 1/1000 or faster.  AI servo was used with a single focus point selected, and high speed continuous drive.  I set the ISO to auto and later found the high ISO of the Mark II to be excellent as long as your exposure was correct. 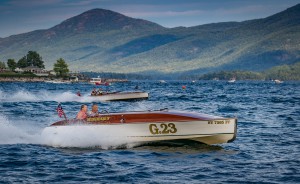 Later in the day, the skies clouded over and we lost most of the light, but the feel of the low light worked with the rough water and strong winds.  The drivers and passengers received numerous soakings from the spray, luckily for them the temperatures were warm.

The images show the energy and excitement of being on the water at speed.  My photos were published online at WoodyBoater.com and were also featured in the Antique & Classic Boat Society’s “Rudder” magazine. 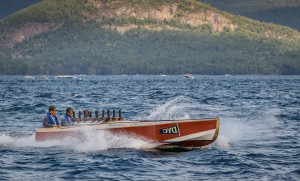